“The people grew so evil, the men started to marry the men and the women married the women. This is the worst evil act you can do, next to murder. It is like murder. Whenever people commit that sin, then the Lord destroys them.”
—Prophet Warren S. Jeffs

Last summer in Las Vegas, I visited an unsavory adult video bookstore. (So much for Las Vegas’ motto: “What happens here, stays here.”) At three in the morning, when getting back into my truck, I was approached by a young hustler. He was very scruffy, about 18 I suppose, and awfully young to be looking like a street person. When I told him I was not interested, he asked me if I was Mormon because of my Utah plates. I said ‘no’ and he sounded disappointed. I asked him if he was from Utah and he said he was from Hildale. Because it was late and I really was not looking for company, I didn’t want to spend much more time talking to him, but now I wish I had. It would only dawn on me later that Hildale is the Utah half of Colorado City, the polygamous community of the Fundamentalist Church of Jesus Christ of Latter Day Saints. 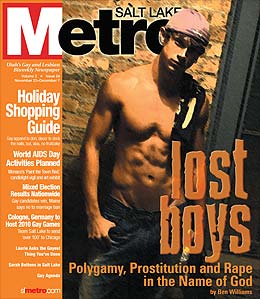 Pocatello Pride — fun for all ages