In the last seven years, cities in Southern Utah – especially Cedar City and St. George – have seen a dramatic rise in population. And the Washington County HIV/AIDS Task Force has sought to make sure that the number of new HIV infections in the region doesn’t increase with the number of new people. Currently, the 14-year-old Task Force provides HIV/AIDS prevention education and free same-day HIV tests once each month at the Doctors Free Clinic in St. George.

But in 2008, the organization will have to do their work without any funding from the Utah Department of Health.

“We’re very disappointed,” said Ruthann Adams, a retired public nurse who has served as the Task Force’s president for the past 10 years.

As Adams explains it, she submitted a proposal to UDOH in September, asking for $11,000 to continue the Task Force’s free testing and educational outreach programs, which are regularly given to local university students (including first year nursing students) and Dixie State University’s Pride Club. Additionally, she planed for the Task Force to expand its advocacy to a number of other venues, including the Social Worker Group of Southern Utah and the local Drug Court, which enrolls up to 60 clients at a time.

But despite Adams’ hard work and planning, her proposal was not one of the 11 a UDOH review committee selected to receive funds for HIV/AIDS education, testing and prevention. Twenty proposals from all over the state were submitted, and none of the accepted proposals came from organizations in Southern Utah.

Adams said that Lynn Meinor, Director of UDOH’s HIV Prevention Program, gave her the following reason for her proposal’s rejection: “She said we didn’t seem to be reaching the population they wanted to reach.”

Although Meinor said she could not comment on the proposals that did not receive the committee’s approval, she did say that the Utah AIDS Foundation had received funding to continue education and testing initiatives in Southern Utah.

“The work will continue in the community,” she said.

However, Stan Penfold, Executive Director of the Utah AIDS Foundation, said the grant his organization received from the state health department did not include enough money for their HIV testing program to allow them to do this. According to him, the grant the Utah Health Department awarded UAF for 2008 included funding cuts in their outreach program to gay and bisexual men as well as their HIV testing program. Although Penfold added that he and his staff had yet to sit down with UDOH officials for contract negotiations, he said that the cuts for both programs “looked like it will be $10,000-$12,000.” (In contrast, Penfold said that the state awarded more money to UAF’s outreach program to gay and bisexual Hispanic men, increasing the budget for this program from $20,000 to $26,000.)

“[As far as testing in Southern Utah is concerned] they’ve set us up in a no-win situation,” he said. “This whole situation problematic because [HIV and STD testing] is a public health issue, yet it’s not being addressed at the state and county level.”

According to Penfold, this is not the first year the Utah AIDS Foundation has faced funding cuts. Last year, the state health department reduced their total budget by $10,000.

When asked about the decrease in funding for HIV/AIDS prevention programs in Utah, Meiner said that the Center for Disease Control, the part of the U.S. Department of Health and Human Services which gives state health departments the money to fund local HIV/AIDS programs, has been tightening its purse strings over the past four years.

“There have been significant cuts in HIV prevention nationwide,” she said.

But the lack of a state grant for 2008 is not the only funding crisis the Washington County HIV/AIDS Task Force has faced this year. According to Adams, it also did not receive funds for 2007 until this August.

To explain the situation, some backtracking is required. In 2004, Adams served as Health Officer of the Southwest Utah Public Health Department, the public health organization serving Beaver, Garfield, Iron, Kane and Washington Counties. At this time, she obtained a three year, $15,000 grant from the state health department to fund HIV testing and education, as well as to handle testing for other communicable diseases, including tuberculosis. To get the money each year, Adams had to sign a contract with the state.

All went well until 2006, when Adams retired. Commissioners from all five counties then selected Dr. David Blodgett, M.D., M.P.H., to take over as Health Officer. At this time, Adams said Blodgett promised that he would sign the contract for 2007.

But after several months had passed with no money, Adams said she realized that Blodgett had never signed the contract, leaving the Task Force struggling to fulfill its contractual requirements without any money to do so.

“The local health department left us floating in the wind,” she said. “They never did tell us why he wouldn’t sign the contract.”

Adams said she contacted the state health department to explain the situation, and at the end of August they sent her a check for the money. Three months later she says she has spent “over half” of the money, with bills for October and November that still need to be addressed.

When asked why he didn’t sign the contract, Blodgett said that it was Adams’ and not his responsibility to sign the 2007 contract, and that Adams had taken the agreement with her when she retired.

“It was absolutely not [my responsibility]. That was never the agreement,” he said.

Adams said that the contract only became her responsibility in July of this year, after Blodgett refused to sign it.

“In the six months previously, the state health department was trying to negotiate with him to sign off on it,” she said. “We only became direct contractors instead of subcontractor with the state when he felt he couldn’t sign the contract.”

Adams said she sent the Task Force’s bills to Blodgett, who never responded. And then she called her friends at the Utah Department of Health to ask them what was going on.

“They said they had sent the contract back to him with the revisions he had requested, and he didn’t sign it,” she said.

Blodgett also said that he hadn’t heard about the Task Force’s inability to get state funding for 2008-2009.

“There have been cutbacks in programming and I wasn’t aware the Task Force hadn’t received any money for next year,” he said.

As if these woes weren’t enough, the Southwest Utah Health Department currently does not offer testing for any communicable diseases (including STDs). Although the organization’s Web site says that it will “attempt to find the source” of any of Utah’s 77 reportable diseases (that is, those that could drastically effect public health), and will attempt to “locate sexual contacts to assure they are disease-free” in the case of reported STDs, it refers people seeking STD testing to St. George’s Planned Parenthood. The Web site simply stresses that doctors who diagnose a communicable disease in a patient must report it to the Southwest Utah Health Department as soon as possible. A list of all 77 reportable diseases can be found here: health.utah.gov/epi/report.html.

According to Adams, the local health department’s lack of funding for the Southwest Health Department leaves Southern Utah vulnerable to the spread of communicable diseases. As an example, she cited a survey the Washington County HIV/AIDS Task Force conducted in 1994 and 1995 to determine the rates of chlamydia (one of the most common STDs) in young, sexually active women in Southern Utah. Of all the sexually active women aged 18-22 who came in for testing, one in four had the disease.

Although this survey was conducted over ten years ago, Adams said she is concerned that the situation hasn’t improved.

“I don’t think [chlamydia rates in Southern Utah] have gone down when you look at the number of cases reported statewide,” she said.

According to data collected by the Utah Department of Health’s Bureau of Communicable Disease Control’s STD Control Program, the number of chlamydia cases reported in each county and region of Utah has steadily increased since 1995, and has climbed particularly in the past five years. The total number of reported cases of Chlamydia in the state’s Southwest region (which includes Beaver, Garfield, Iron, Kane and Washington Counties) was 134 in 2002, 141 in 2003, 153 in 2004, 198 in 2005 and 216 in 2006. The total is not cumulative.

She said she will also continue to teach university students about HIV/AIDS and offer her clinicals to first year nursing students.

“This is something that is important to us, so we’ve agreed that we’ll do the teaching if anyone calls,” she said. “We’re willing to do that for free.”

Penfold also said that the Utah AIDS Foundation will also continue to offer same-day results HIV testing at Southern Utah Pride, just as they have done for the past several years, But when it comes to doing more for the region with its budget cuts, Penfold said UAF would have to look at other options, including the possibility combining forces with Planned Parenthood.

“They have testing available, but it’s a bit expensive. Maybe we can see if we can work with them to lower the cost to make it more accessible,” he said.

And Meiner added that the Utah Department of Health would continue to train volunteers in the area to do HIV/AIDS counseling and testing, which they can offer in conjunction with events such as National HIV Testing Day and Southern Utah Pride.

“We’ll take training down when there’s interest,” she said.

Despite all of this, Adams said she is worried about the future, because her all-volunteer organization can only be stretched so thin.

“Volunteerism just goes so far,” she said. “George Stoddard [the Task Force’s secretary, treasurer and support educator] are a bit burned out now, and we need help.”

A Center Thanksgiving with All the Marmalade 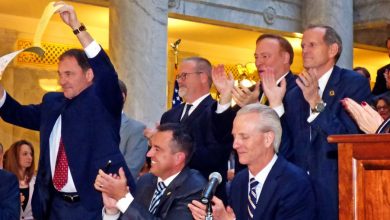