Queer people in Utah are off the hook. For now. The Legislature has set their targets once again on Latinos – who are Enemy ‘08 for the powers that be. On MLK Day I logged onto the Tribune to read that seven bills were targeting undocumented families in Utah. The conservatives – always needing an enemy –want to strip “driver’s privilege” cards, revoke in-state tuition and pass several other punitive bills. One bill even wants to give police officers the powers of immigration authorities. If you are unlucky enough to be pulled over, you could be arrested and deported – even if you have a dependent family waiting at home. In the name of enforcing laws, self-righteous Sen. Bill Hickman, R-St. George, and Rep. Glenn Donnelson, R-North Ogden, among others are sponsoring cruel legislation that will have thousands of Utah families living in constant fear (on top of the fear they already experience). Well, the argument goes, “those people are breaking the law!” True. And I remember when having gay sex was a criminal act. Queers also have a history of being rounded up and sent to jail for breaking the law. So what?

Two years ago our Legislature was pushing four anti-gay bills. It’s strange how the pendulum swings around. It’s the gays one year, Muslims the next, and of course those damned “Illegals” today. Having an enemy is so effective at mobilizing the base. One successful strategy for remaining in power is to keep everyone afraid and suspicious of each other. The Republicans under the Bush Regime mastered this tactic – their Utah counterparts no less so. And hate-mongers like Lou Dobbs and Glen Beck, posing as journalists, build careers by stirring Americans up into a frenzy. Never mind that conservative legislation like NAFTA dynamically exacerbates the problem of undocumented border-crossing. Never mind that our economy depends on cheap labor. Never mind that undocumented workers pay taxes. Never mind that undocumented Latinos are actually human.

We’ve come so far, Dr. King, but we’ve gotten nowhere. Well, you might argue that we HAVE come far in this nation. We have the potential of our first black or woman president. They are both advocating “change,” the buzz-meme of the moment. And after eight disastrous years of Bush/Cheney we all want that! Yes, but not too much. Outspoken black journalist Glen Ford recently questioned Hillary and Barack’s call for change:

When no real change is offered – when both frontrunners are wedded to a lingering presence in Iraq and to reestablishing U.S. hegemony in the world; when insurance and drug companies are left virtually untouched by the duos' tepid forays into broadening health care coverage; and when neither offers a whisper of an idea on halting the corporate-engineered global Race to the Bottom, then it is certain that, although ‘change’ may come, it will be at the direction of the rich who have brought the nation and planet to the very brink of catastrophe. (“The Sinister Nothingness of Change,” blackagendareport.com)

It’s more of the ‘same ole, same ole’. Despite their rhetoric, we should hold no illusion – a President Hillary or Barack will give us more militarism, more media consolidation, more power to pharmaceuticals, more stress on the middle class, and more disregard for the poor. And it’s a shame that Utah’s Democratic Party and my own representative (I hope you are reading, Jackie!) endorsed a hawk candidate who voted for the Iraq war, voted for the Patriot Act and voted to escalate military conflict with Iran. Hillary will not support universal health care (she receives massive funding from Insurance companies). She will not reform NAFTA (her husband passed the damned thing). She has publicly stated she will increase the military (more troops needed to expand our Empire) and she has also said she will not support gay marriage (sorry, Human Rights Campaign).

And just this month, Obama was singing the praises of Ronald Reagan, while deriding the “excesses of the 1960s and 1970s” – which one can only assume means feminism, the anti-war movement, environmentalism, gay liberation, and (possibly) the civil rights movement. Barack is talking code to win the votes of white conservatives.

So why can’t Democrats and progressives get on board and actually pick a truly progressive candidate? What are we afraid of? What is holding our country back from pulling out of Iraq, providing universal health care, impeaching Bush/Cheney, crafting fair immigration policies, providing equal rights for gay, lesbian, bisexual and transgender Americans and creating a kind, just, sustainable future for our nation?

The only thing lacking is the will of the American people. We are still in love with the power structure that disenfranchises the many for the benefit of the few. We covet a standard of living that is built on the backs of the working poor. It’s we who need to change.

So how will the queer community rally around the Latino community as the Legislature heats up? Will we shrug our shoulders and think, “God, at least it’s not me?” Or will we stand up in their defense? Will we write op-eds to the papers, will we call in to talk radio shows? Will we challenge our representatives and tell them to back off? Will we attend rallies at the Capital to show our solidarity?

This is a great opportunity to build coalitions with people who are also being marginalized. And who knows, if we show them support now, maybe the Latino community will mobilize in support of us when the next wave of anti-gay legislation is being written. I have little hope for the national elections. The game is rigged. The power is set. The status is quo. Hillary Obama Romney McCain. They’re all the same. But here in Utah – here at the grassroots we can make real change happen. We can build allies, we can influence legislation, we can offer a voice of defense. We can change the discourse and influence the trajectory of the ‘08 legislative session. That is, if we have the courage and the will. Have at it! 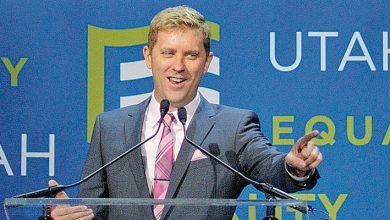 Equality Utah endorses 19 candidates, including both Biskupski and Becker