An interfaith celebration bringing together gay and gay-friendly Mormons, pagans, Baptists, Jews and others was held at the Holladay United Church of Christ on Feb. 10.

Russ Gorringe, WinterPride InterFaith Chair and chair of the church’s Open and Affirming Ministry, welcomed the participants to the gay-friendly church where he married his partner and that he now calls “the place I have found to worship.”

“No matter who you are or where you are in life’s journey, you are welcome here,” he said.

The invocation was given by President Robert McIntier of the Restoration Church of Jesus Christ, an off-shoot of the Church of Jesus-Christ of Latter-day Saints which welcomes gay members and admits women to the priesthood.

McIntier encouraged the assembly to be thankful for being able to come together for the evening. “Not so many years ago such a gathering may not have been possible,” he said. He also encouraged those gathered to fight for laws that would bring about “peace, equality and justice for Heavenly Father and Heavenly Mother’s children.”

“We’re here to proclaim to our community that we are one people, a queer people,” he said.

Remarks for the evening were provided by a number of Salt Lake Valley’s religious leaders, including Rev. Erin Gilmore of the UCC, Rev. Dee Bradshaw of Sacred Light of Christ Metropolitan Community Church and Rock Oakeson of Congregation KOL AMI.

Gilmore opened her remarks by quoting from the book The Life of the Beloved by Catholic writer J.M. Nouwen. She then asked the assembly to remember that they are God’s beloved people, even though they may be told they cannot be gay and worship God.

“There are lots of voices telling you that you are worthless, bad, unworthy. And then there is that even more insidious voice out there that says, ‘prove yourself otherwise,’” she said. “But remember that other voice that says, “You are my beloved and upon you my favor rests.’ Our spiritual journey is listening to this voice above all others. We help one another honor that sacred voice that calls one another beloved.”

Bradshaw called upon the assembly to love God and each other without prejudice. He recounted the story of Adam and Eve hiding from God after they had sinned, and said this story was symbolic of the human struggle to accept God’s love.

“We can be in a relationship with God no matter what people say, because God seeks us out,” he said. “Jesus said, ‘Whosoever believes in me shall have eternal life.’ Not a period, not a comma, ‘but,’ ‘except.’ Jesus said that so we could walk without fear in that relationship.”

As part of his speech, Oakson, who came as a representative of the LGBTA Jewish Community at his synagogue (Rabbi Tracee Rosen was unable to attend), recounted the day when his 10th grade class at the congregation’s religious school created a global holiday as part of a school project.

“Jonathan, a straight wrestler, said, ‘You know, I think the world should get over itself. It’s ok for guys to hold guns, but not each other’s hands? They need to get their priorities straight.’ – I almost wet my pants when I heard that.”

After much discussion about the discrimination gays, lesbians, bisexuals and transgender people face throughout the world, Oakson said his class elected to create a holiday “not for gays, who have their acts together, but for straights who can’t accept them.” They decided to name it World Acceptance Day “for all human beings to be aware of and accept all people” and to remember those in the past who had been rejected for any reasons.

Oakson ended his speech by saying he longed for the day when their holiday would be realized every day across the world.

In two separate speeches, David Winmill and Jeff Lensman, leaders of the First Baptist Church’s LGBT Ministries, discussed their experiences at the church, where they became the first gay couple to be married at its altar.

Winmill, a former Mormon, said he accepted the “lie that you can’t be gay and worship God” as a teenager but was drawn to worship at the First Baptist Church when he was hired to sing for a service. He said he chose this church because of its ties to social justice movements, in particular the abolition movement of the 1800s – and because its congregation accepted him and his partner.

Lensman recounted the way the church’s community rallied around him and his partner when Lensman was diagnosed with oral cancer. During the brutal chemotherapy sessions, he said he learned how to surrender not just to the love of his partner and church, but to the love and will of God.

“In the hospital I finally learned to let go of my ego and my fear and to let the doctors, nurses and my partner take over caring for me,” he said. After a week of chemotherapy treatments, he said his tumor vanished. And while he saw this as miraculous, he said he only later realized that the support and love he received was also a miracle.

The service closed with a reading of the Rainbow Chakra Litany, a blending of Hindu, Christian and pagan traditions which honored the gay community’s strength, creativity, passion and sense of justice as well as local community members who had died from suicide, murder or other forms of violence. Maureen Duffy-Boose, Lady Aisling, High Priestess; President of the Covenant of Unitarian Universalist Pagans then gave the benediction. After explaining that those in her faith tradition stood and looked one another in the eye when receiving a blessing, Duffy-Boose had the assembly stand as she blessed them.

Music for the service was provided by the Salt Lake Men’s Choir, organist Scott Green-Mills and the UCC’s alternative/folk worship band, Twist of Faith. Joni Weiss of Science of Spirituality, a global interfaith group dedicated to meditation, service and personal transformation, also read the mystic poem “The Cry of the Soul” by the group’s former leader, Sant Darshan Singh. 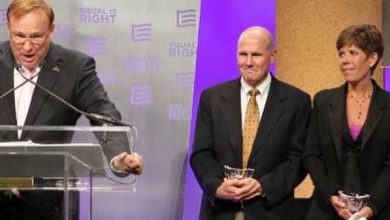