The Trapp Door is coming up on its fourth anniversary and has brought in Jackie Beat, known for thrashing the popular songs into submission, to help celebrate. She’s no drag queen — she’s a drag superstar!

QSALTLAKE: So what is life like as a drag superstar? Celebrity parties every night, shopping Rodeo Drive every day, power meetings with agents? 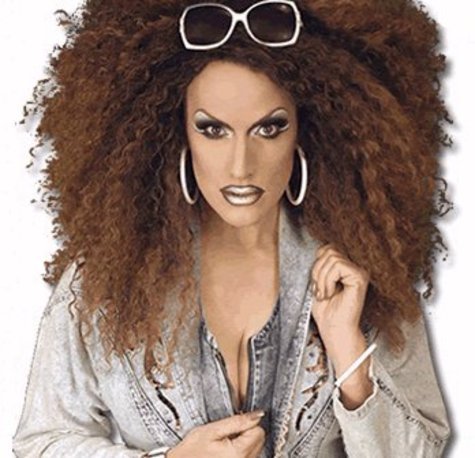 JACKIE BEAT: I never know whether to answer a question like this truthfully, or “in character.” Life as a performer can be very glamorous and fun, but mostly it’s a lot of hard work. Unless I’m getting paid, I don’t go out to nightclubs. I don’t drink, smoke or indulge in controlled substances — unless you count pizza. I know that Dolly Parton always puts on a wig and makeup — even when she’s just going to the supermarket — “because the fans deserve it.” Frankly mine don’t, so please leave the big middle-age man with no eyebrows in the freezer section alone. It’s his day off!

JB: I love, love, love writing especially since I don’t have to put on makeup to do it. And it’s always great fun to be in a movie especially if Robert Deniro’s in it! You get paid well and it gets seen by millions of people all over the world. But my favorite thing is doing a live show for a roomful of people. There’s nothing better than humiliating … er uh, I mean TALKING to people in the audience. Nothing beats hearing that laughter and applause. You don’t get that on a TV or movie set.

Q: What was the moment that you knew you made it as a superstar?

JB: When I was flying to a show in a private plane with Roseanne. We were eating chocolate-covered strawberries and laughing it up. Suddenly I thought, “If this plane goes down, the headlines will read ROSEANNE BARR AND OTHERS DIE IN CRASH. I don’t want to be OTHERS. I’m a star, dammit!

Q: You have a million looks. Did you come up with all of them? How do you go about creating different characters?

JB: Sometimes I think it works against me because queens like Lady Bunny and RuPaul have a signature look that they don’t really stray from. But I get bored! I love doing different eras and different hair colors. I also love doing scary looks, ugly looks and my new favorite is the Old Lady look. I call it Tran-Mama and I even have a song about it to Van Halen’s “Panama.”

Q: You’re known for parody songs, like “Baby’s Got Front” and “Beaver” (instead of “Fever”), and “I’m Not a Woman.” How do you get inspiration to create such great songs?

JB: I cannot hear a song anywhere — in the car, in a store — without hearing sick and twisted lyrics. It’s the 12-year-old boy in me. Hey, isn’t that the new Michael Jackson album? Anyway, so many people tell me that I have ruined songs for them. They say they were in an elevator and “Smooth Operator” by Sade was playing and they couldn’t help but hear me singing “Poo On Me Later.” I love it!

Q: You released a Christmas Album this year. How did that go?

JB: It went like everything I do — GREAT! Ruining pop songs is one thing, but destroying holiday songs is just the best. I sure hope Jesus has a sense of humor.

Q: I hear there’s an ABBA medley coming out. Tell us about that and what else is coming up.

JB: My new CD, “Filthy Whore,” features 15 songs including the title track about Britney. Three of those songs are 10-minute medleys like the Abba Medley and these two classic TV theme song medleys I did. It’s genius. Please buy it!

Q: Since you are a fashion cop, what is the dress code for a Jackie Beat show?

JB: If you’re a good-looking in-shape young man, please don’t wear a shirt. If you’re a drunk, chubby straight girl who is obsessed with me, please wear a muzzle and bring a purse full of money.

Q: Anything else you’re just dying to tell Salt Lake?

Jackie Beat will perform at the Trapp Door, a private club for members, on March 22. Her Web site can be found at jackiebeatrules.com