I went to Hong Kong a few weeks ago. One night I went out to a market and bought a couple things, including a beer at a 7-11 on my way back to the hotel room.

As I was walking on the busy street, this man walked up next to me and followed me for awhile. Eventually he said, his English really faltering, “Excuse me … excuse me, but I am gay.”

My first reaction was to say, “Far out” like the Dude in the Big Lebowski when he doesn't realize the landlord is asking for rent.

My second reaction was to say, “That is so cool. I'm a sex columnist for a gay and lesbian magazine in Salt Lake. Can I interview you and ask you questions about sex in Hong Kong?”

Instead, I just waited for him to continue. He asked if I was interested in getting together with him. Yeah, it took me a minute, but I finally realized that he was hitting on me.

So I went with my third reaction. “Thanks very much for offering, but I'm not interested.”

I might have confused him, because I said “thanks” and “no” in the same sentence. Or maybe he was just persistent. “Your hotel's just that direction, isn't it?” he asked. “Just let's go up for 30 minutes.”

He asked, “What's wrong? Am I not attractive?”

“Oh.” And he started profusely apologizing as I walked back to my hotel, alone.

I've been hit on by gay men before, but this time left me with more questions than I’ve ever had. The thing is I could have sworn I’d seen that man before.

If that gay man had been a straight woman who approached me in the same way, I would have thought that she was either a prostitute or riddled with STDs. But guys are different than girls.

Of course, all that wondering got me thinking about the technicalities of hotel room sex. Did he want me to suck his cock, or was he going to suck my cock? Was he a top or a bottom? What does top and bottom really mean? Would he really be there for just 30 minutes, or would he still be there the next morning, complaining that I didn't hold him enough? I'm sure it's more natural than that with gay sex, but I still wondered.

And then I thought about what other people from Utah would do. Would a closeted Utahn have invited this man to his hotel room? What about other straight guys? Would a straight guy be curious enough to experiment in a similar situation? After all, no one would ever know. I mean, how many Utahns would you have to walk up to on the street and ask them to have sex before you got to see the inside of a hotel room. Especially knowing that no one would ever find out. And what would a gay man do in that situation? How picky are gay guys? Was this guy attractive? I can never tell attractiveness in guys (it kinda comes with the territory of being a straight man).

Where did I know this guy from?

I don't have answers to any of those questions, but I once did a social experiment to see what swing shift gas station attendants would do in an interesting situation. It kind of reminds me of my encounter in Hong Kong.

I walked into the gas station, picked up three food items that were worth a dollar each, and went up to the attendant. It was late at night, when the attendant was alone. I put $20 on the register, and said, “If you let me walk out of this store without ringing these up, I'll give you the twenty.”

I did this experiment about ten times, and the attendant never took the twenty bucks. With one particular attendant, I could see him as I got into my car. He stood with his hands pressed on the counter, gazing ahead and very, very deep in thought. I could tell he was going over and over in his head the details of what I just offered, and probably kicking himself for not taking the twenty bucks.

I imagine a very similar look on the faces of many Utahns who say no to offers of gay sex. 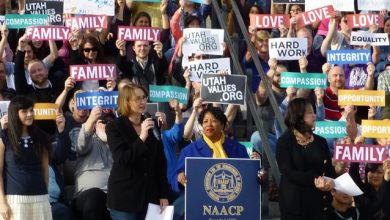 You Are Welcome at the YWCA