Last year, the Utah Pride Festival and parade had a single Grand Marshal. This year, however, they have several: Salt Lake City Mayor Ralph Becker and the members of the Salt Lake City Council.

Utah Pride Center Executive Director Valerie Larabee, who initially suggested the public officials to the Festival’s nominating committee, said that the Mayor and the Council were chosen because of their tireless work for Utah minorities, including the gay community.

“Mayor Becker deserves this honor because of his inspiring and broad vision of human rights initiatives that affect all minority communities in his municipality,” said Larabee.

Just days after his inauguration this year, Becker proposed the creation of a domestic partner registry for Salt Lake City residents. Although the registry was designed to give private employers who offer domestic partner benefits proof that a couple lives together and shares financial obligations, several Utah legislators opposed it, even after the City Council unanimously voted to approve the registry. When anti-gay Sen. Chris Buttars, R-West Jordan, proposed a bill that would have rendered the registry illegal, Becker testified in its favor before a legislative committee.

“If the legislature overrides Salt Lake City that would be a big mistake,” he said at the time. “Salt Lake City has a population that wants this. We’re only trying to do what’s best for our city and citizens.”

Ultimately, the registry survived all legislative challenges with only its name changed to the “mutual commitment registry.”

“It was also fitting to include the City Council, as they unanimously voted to approve the Mutual Commitment Registry not only once, but twice, regardless of its name,” Larabee continued. “Our community is fortunate to have such supportive leaders. They truly lead the state in progressive policy by example. ”

The Utah Pride Center will honor Becker and council members Luke Garrott, J.T. Martin and others at the Grand Marshal Reception at Trofi (the Hilton Salt Lake City Center) on June 6 at 6:00 p.m. Fittingly this year’s festival will also be held at Washington Square – the political home to the Mayor and the Salt Lake City Council.

Becker said that he was honored to be chosen.

“While we have a long way to go before we achieve full equality, I for one will be celebrating all that we have accomplished in the past year to ensure equal rights, fairness and dignity for residents of Salt Lake City, right here at the 2008 Utah Pride Festival as your proud Grand Marshal,” he said.

Councilmember Luke Garrott also said he was proud to be selected as a Grand Marshal.  “Pride is about freedom and the ability to be oneself. I’m proud that Salt Lake City has partnered with the GLBT community to promote acceptance and diversity in Utah,” he said.

Tickets to the Grand Marshal Reception are $75 and can be purchased online at utahpride.org. All proceeds from the reception benefit the 2008 Utah Pride Festival, a program of the Utah Pride Center.

For the Love of Mary Tebbs 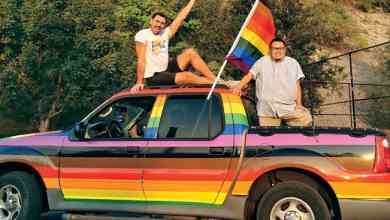