Over 50 people packed a court room for David James Bell's first court appearance since being arrested, accused of kidnapping two children and burglary.

Bell and his partner, Dan Fair, were hospitalized after being severely beaten by their next-door neighbors, who have accused Bell of taking a two-year-old girl and four-year-old boy from their home at 5:30 in the morning while the parents were in the yard drinking the morning of July 4.

Friends stood outside the Matheson Court House in the rain prior to the hearing protesting what they called the one-sided investigation and reporting by the media holding posters with slogans such as "Let the Truth Be Told," "Injustice in South Salt Lake" and "One Side is Not the  Whole Story."

Alex Wrathall, holding a sign saying, "This is a Hate Crime. Fair Treatment for All People," said he was there protesting the fact that the family, the media and the general public decided "because he is gay, [Bell] is a child molester and is not getting his rights to due process before being determined guity."

Media reports have had several different versions of what happened the morning of the incident, including saying Bell, at 5'5" and 135 pounds, carried the two Polynesian children over a four-foot fence after abducting them from the family's living room. Reports have placed the children in the couple's bedroom, living room, and basement when "found" by the mother. 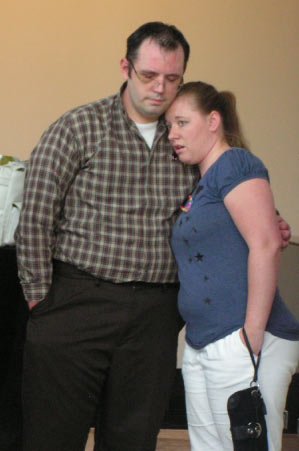 A little-reported fact was that a nephew of the family witnessed the crying children knock on Bell's door in apparent search for their parents.

In the hearing, Bell's attorney, Roger Kraft, moved to have Bell released from jail pending a delayed report from pretrial services.

"My client is innocent," Kraft told the judge. "Every day that David Bell sits in jail is another day of injustice."

Kraft argued that Bell is not a flight risk or a risk to the community.

"On paper, this [the allegations] looks terrible," Kraft testified. "In reality, these probable cause statements are drawn from a one-sided view. Few, if any, witnesses within Bell's home were questioned."

"I am convinced that Bell will be acquitted. This," Kraft said, once again waiving the court paperwork, "is absolutely not David Bell."

State prosecutors said that they believe that Bell entered the family's home, which is a "very important issue in what is alleged in this case."

The two-year-old girl's mother, Lulu Latu, addressed the court asking the judge to not allow Bell to be released.

"I cry every time I think about what he's done," Latu said of Bell. "We have had to relocate our family because the children no longer feel safe in the home."

(Fair, Bell and Bell's sister and brother-in-law also relocated out of their house out of fear of further violence from the family.)

The judge left for a five-minute recess to consider the motion and returned saying because pretrial services had not released their report, she did not have enough information to determine a risk to the community.

Kraft also asked the judge to lift a "no-contact" order that forbade Bell from talking to his partner or his sister and brother-in-law. Bell has not been able to speak with his partner of five years since the incident. Fair was hospitalized for three days after being assaulted with pots and pans and having their large-screen television dropped on his head.

The judge agreed that the order was overly-broad and lifted the order.

After the hearing, Kraft addressed the large crowd of supporters in the hallway outside the courtroom.

"DJ has a long row to hoe," Kraft said. "This is going to be an expensive and difficult case. If you want to help, donate to his defense fund."

"Know that my heart is in this case. DJ is as innocent as any person I have ever represented," Kraft continued. "This is a huge injustice. This is a hate crime."

Bell's sister, Emily Gammell, spoke to the media, saying, "the most upsetting thing to me is that my brother is accused of doing something he would never do. He was always such a generous big brother. He was always willing to take me around with him, and he would never hurt someone else's kids, let alone go in their house and take them."

Kraft said that the parents of the children are using Bell to cover their own neglect.

"This is a case where parents had no idea where their kids were or what they were doing at 5:30 or 6:00 in the morning because they'd been out drinking all night."

Bell and Fair's supporters say that the South Salt Lake police department conducted a one-sided investigation and wonder aloud why the father, who beat Bell and Fair even after the children were out of the house, was not charged for assault.

Because the case is still under active investigation, South Salt Lake police denied  QSaltLake's request for the police report of the incident.

Bell has performed for gay community fundraisers for many years as Lola Taylor. A fundraiser for Bell's legal fees and Fair's medical expenses will be held at Paper Moon, a private club for members, on Friday, July 25 at 8:00 p.m. Paper Moon is located at 3737 S. State Street in South Salt Lake.