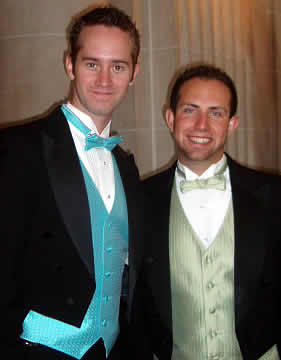 When did you get married?

Friday, July 11th at San Francisco City Hall. We are also planning a ceremony here in Salt Lake sometime in September that our friends and family can be a part of.

The ceremony took place in the rotunda in San Francisco’s City Hall. Because we were married out-of-state, we only had one friend there who happened to be in town and he served as our best man and our witness to the ceremony.
When we have our ceremony here in Salt Lake, we will recite vows that we have written to one another in front of our friends and family.

Why did you decide to go through a ceremony?

Well we went to San Francisco to have the “official” ceremony so that it would be somewhat legal in some respect.
And we are having a second ceremony here in Salt Lake because we want to have a special day that includes our close friends and family to celebrate our love with them.

What was your most memorable part of the ceremony?

The whole experience being at San Francisco City Hall was just amazing. It was our first time visiting there and it was absolutely beautiful. The whole thing was surreal and incredibly memorable.

Did you hire a planner or photographer?

We planned the ceremony in San Francisco ourselves just because it was pretty simple — being at City Hall, there isn’t much you have say in. But we did have to make sure we had a witness present (luckily our friend was in town). We also had to reserve a time for our Marriage License Appointment and also for our Civil Ceremony. And we wanted to be sure to have pictures of the day so we hired a photographer, Jim Cox. We found Jim on an Equality California website that featured different wedding services from people that give 20 percent of their fees to Equality California to help stop the same-sex marriage ban from being put on the ballot in November. After speaking with Jim, we knew he had a vision for our pictures that was exactly what we were hoping for. Jim lives in Los Angeles so we bought him some plane tickets and flew him into San Francisco. It was definitely the right choice! He was awesome! He has his own website, too (jimcox. net)!

As for our ceremony here in Salt Lake in September, we will not be hiring a planner, but rather just working with some close friends to plan our ceremony and reception.. We can’t wait to get started on it!

Person of the Year … and the Runners-Up

An Amazing and Wonderful Thing: Cleve Jones’ Life as an Activist