When it comes to discussions of romantic partner domestic violence, gays, lesbians, bisexuals and transgender people are often overlooked. Yet according to the Gay Men’s Domestic Violence Project, nearly one-third of gay men will experience abuse from a romantic partner at some point in their lives. The same statistic holds true for lesbians as well.

Although same-sex relationships are just as prone to domestic violence as their straight counterparts, gay men and women often face unique challenges that can make finding help difficult, including: fears of being outed, estrangement from family members,                 and lack of shelter services that are both willing and equipped to help people who identify as other than straight or cisgender (that is, people who identifying with their biological sex).

“The community is so stigmatized that a lot of times people don’t want to come forward because they feel that [doing so would put] would create problems for the community,” such as reinforcing cultural stereotypes that same-sex relationships are more prone to domestic violence than straight ones, added Heather Masterson, executive of South Valley Sanctuary, a domestic violence shelter in West Jordan.

The South Valley Sanctuary, said Masterson, recognizes these and other specific hurdles gay and transgender domestic violence survivors face on their road to safety and healing. Located in West Jordan the Sanctuary is open to all clients regardless of age, race, cultural identity, religion, sexual orientation or gender identity.

“We really believe in serving everyone impacted by domestic violence,” said Masterson. “Basically anybody who’s coming in who has experienced intimate partner violence in the last month by a current or former partner qualifies.”

By “anyone,” Masterson also means male survivors, gay, bisexual and straight (although she added that most of the men who call the shelter identify as gay). Several of the shelter’s 13 rooms are earmarked for men who, regardless of stereotypes, also can be targets of domestic violence—and targets who often suffer in silence.

“For men it’s very difficult to reach out,” said Masterson. “There’s definitely the idea you should b able to take care of yourself. It’s very isolating to come into a shelter and you’re the only man there, [especially because] traditional domestic violence shelters were created for safe refuge for women and children, so they feel they don’t fit in and feel like they’ve been put in another marginalizing situation regardless of how accommodating staff can be.”

“Anyone” also means people of all races and languages. Masterson said that the shelter has several staff members who are people of color and more bilingual and trilingual staff people than any other shelter in a state.

“We see a diverse population based on that,” she said.

South Valley Sanctuary also carefully screens staff and volunteers to make sure they are open to working with diverse populations. The majority of questions asked during job interviews, said Masterson, focus on diversity issues, including one that is specifically geared towards sexual orientation.

“One of the questions we always ask is how would you respond [to] a scenario of homophobia between shelter residents,” she said.

Like most shelters, South Valley Sanctuary generally operates at capacity, with mere hours between an individual or family leaving and someone arriving to fill the empty place.

The first step for those looking for shelter is to call the sanctuary’s 24 hour hotline at        (801) 255-1095. Even if the shelter is operating at capacity volunteers at this number can provide callers with what the shelter’s Web site calls “non-judgmental, confidential support” in crisis intervention, domestic violence education and referral services.

If the shelter has space, callers are invited to come down. Upon arriving at the shelter they can receive free food, clothing and personal care items and are asked to fill out a list detailing any additional needs they may have.

Next, individuals meet with an advocate who explains what the shelter can provide and the shelter’s rules and expectations. These case managers, said Masterson, meet with residents on a minimum of once a week (and a maximum of every day) to “identify the different services they’ll need to contact during their stay to maintain a life free of violence.” These services, she said, can include obtaining protective orders, finding employment, handling child custody or child support issues and addressing any medical needs the resident may have. If the resident brings children she or he will also meet with a children’s case manager.

Although Masterson said South Valley Sanctuary is a 30 day shelter, she added that the average stay is typically 45 days, and sometimes as long as 90 days.

“The reality of it is that folks can have a lot of barriers on top of domestic violence,” said Masterson.

“I’m sure there are other folks who don’t identify who come in,” she said.

Since the shelter put out its first gay and lesbian-specific domestic violence brochures this year at the Utah Pride Festival, Masterson said the shelter had seen “a significant increase of men and women in same-sex relationships calling our hotline.”

“And in the last month [September] we’ve really seen an increase,” she added. “When it’s four in a month, it’s pretty big.”

Among those calling the hotline are also a number of transgender people.

“[They] are not necessarily ready to come into a shelter, but they want to get an idea of what they do in shelter and what is expected of them,” said Masterson.

Like many programs that serve gay, lesbian, bisexual and transgender people in the Salt Lake Valley, South Valley Sanctuary works closely with the Utah Pride Center. Both organizations regularly exchange referrals and the Center is regularly supplied with the sanctuary’s brochures.

Additionally, the shelter’s Web site links to several resources for gay and transgender people such as the Gay Men’s Domestic Violence Project and rainbowdomesticviolence.itgo.com, a catch-all Web site listing a number of resources.

Regardless of stereotypes and gay-specific barriers to seeking help, Masterson stressed that the dynamics of power and control abusers use are the same regardless of sexual orientation or gender identity. And fear and violence is never something that a gay person should tolerate from a partner, especially when help is available.

“If we’re creating a service that empowers the most marginalized survivor of domestic violence we’re improving things for all victims,” she said.

Mike Thompson and the Fight for Equality 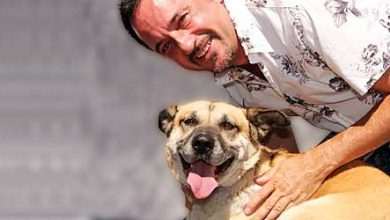 Under the Eaves with Mark and Joe