Salt Lake City police have charged a Magna resident in an Aug. 9 assault against a gay man on Capitol Hill’s Churchill Drive.

According to police, Fa Junior Moimoi, 20, attacked an 18-year-old gay man in a cul-de-sac that overlooks the valley, breaking the victim’s orbital bone — the series of seven bones surrounding the eyeball.

The victim told police that a female with Moimoi asked him if he was gay. The victim said he did not respond and began to walk away. He and two others were assaulted at that point. The victim has since undergone reconstructive surgery.

Police said that Moimoi was part of a group that attacked the victim. They have not released any further details about members in that group.

Moimoi is charged with two counts of aggravated assault (a first degree felony), and one count of misdemeanor assault. Police have issued a warrant for his arrest.

“He is currently believed to be out of state and we are actively following on some leads as to his location,” said Kyle Jones, Detective Division Captain for the Salt Lake City Police Department.

QSaltLake has found a MySpace page under the name "Fa MoiMoi," age 20, of Salt Lake City. Several profile photos show face shots of MoiMoia well as groups of friends throwing gang symbols with their hands while at a wedding. There is also a graphic of the Tongan Crip Gang. Police have not said that the assault was gand-related or that Moimoi is in a gang.

There is also a great amount of Rastafarian imagery and references in Moimoi's MySpace page and messages.

Messages from friends on the MySpace page reference meeting MoiMoi in Hawaiian cities. Police have not revealed that they believe MoiMoi to be in Hawaii.

"Shoots We Drink 2morrow Wen You Get Off Work..," says one post from a 20-year-old Kahumpton, Hawaii "friend."

"what is this? Coming to Hawaii and not saying hi to me? Are you even still on this rock or you went back already??" asked a female Hawaiian "friend" in a message dated six days after the assault. 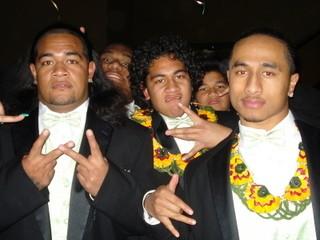 QSaltLake has forwarded the MySpace URL to the Salt Lake City Police Department.

Moimoi is Polynesian, 5’10” and weighs 200 lbs. The police are asking anyone with information on his whereabouts to call 799-3000.