It took several months for the Church of Jesus Christ of Latter-day Saints and a number of other religious and political groups to raise millions of dollars in support of a successful constitutional amendment seeking to ban gay marriage in California.

It took Utah resident Jacob Whipple just 36 hours to put together a protest of Proposition 8 that drew thousands of protesters and all of Salt Lake City’s major news outlets to the LDS Church’s headquarters on the evening of Nov. 7.

“I saw momentum started in California and I didn’t want it to end,” said Whipple, a gay man and a former Mormon who served a mission in Argentina. “I wanted to show we can continue the civil rights movement in a peaceful way and earn the civil rights denied us.”

Although announcements for the protest appeared in newspapers, on the Web pages of news stations and local gay rights groups such as Equality Utah, Whipple largely dispersed his call through emails, text messages and phone calls, which local gays and allied straights quickly passed along (for example, QSaltLake publisher and editor in chief Michael Aaron received more than 40 such text messages on the day of the protest). By 6:00 p.m. protesters of all ages, races and sexes had packed City Creek Park, waving colorful signs and chanting such slogans as “tax the church!”—a call for the federal government to revoke the LDS church’s tax exempt status for involving itself in a political campaign.

Before the sea of protesters began their march around Temple Square, several speakers addressed the crowd from a makeshift stage at the park’s eastern boarder.

“We are the queer children of god and we have gathered tonight to change the world,” proclaimed Troy Williams, the producer of KRCL’s progressive radio show RadioActive and a columnist for QSaltLake.

A former Mormon, Williams called upon gay and transgender people to pursue their Constitutional rights to life, liberty and the pursuit of happiness,”

“Mr. Monson, the LDS Church is on notice,” said Williams, referring to Thomas Monson, the current church president. “We will no longer be shamed and silenced.”

As Williams’ speech became more impassioned, touching upon what Williams called the LDS church’s “embarrassment” over its history of supporting polygamy and what he sees as its hypocrisy in continuing to seal multiple women to a single man in temple marriages, some of the other speakers became visibly uncomfortable.

“I don’t want hurt feelings on either side,” Whipple said, taking the microphone after Williams’ speech. “I know we’re hurting, but driving nails into it won’t solve anything.” He then urged the crowd to be civil and respectful to the church and to “follow in the path of Martin Luther King, not Malcolm X.”

“We might disagree, but we can disagree without being disagreeable,” echoed Rep. Christine Johnson, D-Salt Lake City. An openly-lesbian representative who authored a bill seeking to make workplace discrimination against gays and transgender people illegal, Johnson asked protestors to cheer the many LDS people who disagree with their church’s anti-gay marriage stance. She also encouraged gay and transgender people to be out to their Mormon friends, family, neighbors and co-workers.

“I don’t think it’s Mormonism that’s hurting us but lack of understanding,” she said.

Next, former Salt Lake City mayor Rocky Anderson took the stage. A Utahn who grew up in the Mormon church, Anderson (who is straight) issued an executive order in 2005 that allowed the same-sex partners of city employees access to the city health benefits program. Drawing comparisons to the prior struggles of interracial couples to marry, Anderson called the church’s support of Proposition 8 “a repeat of a tragic and deplorable history.”

Two more gay legislators, Sen. Scott McCoy, D-Salt Lake City, and Rep. Jackie Biskupski, D-Salt Lake City, also addressed the swelling crowd. McCoy urged protesters not to let their anger “turn into hate,” and referred to the LDS church (the headquarters of which are located in his senate district) as his constituents — with whom he doesn’t agree on the issue of gay marriage. He also promised to help the Mormon-dominated legislature understand “that in the same breath you can’t say you accept us and then turn around and fund a campaign to strip us of our rights in California.”

Like the others before her, Biskupski encouraged protesters to reach out to their LDS friends, family and colleagues to show the “who we are and why we should be treated equally.” She added that she had every hope that Proposition 8 and similar amendments that passed in Arizona and Florida would soon be history.

“To be surrounded by this amount of courage and I would say dedication, there is no way we’ll see these laws in place for long,” she said. “What we know and have seen is America can change. That is the true genius of this nation.”

The Salt Lake City Police Department closed North Temple between Main Street and West Temple to accommodate the surge of protestors, which stretched at one point around the two blocks encompassing Temple Square and the LDS church’s headquarters. While Whipple’s goal was to bring 1,000 people out onto the street, Salt Lake City Police Department spokeswoman Lara Jones said that particular goal had been “clearly exceeded.”

While noting that the police department does not and cannot do an official counts at such gatherings, Jones nevertheless said that some experienced officers had estimated the number of protestors being between 2,000 and 5,000.

Matthew Kulisch was one of those numbers. Kulisch was one of four gay former Mormons who participated in the 2007 Equality Ride, gay spirituality group Soulforce’s much-publicized bus tour to sponsor dialogue at schools with anti-gay policies. At the protest he carried a sign reading “Reply from ‘The One,'” a reference to “To The One,” a notorious LDS pamphlet on homosexuality written by Elder Boyd K. Packer, which Kulisch called the church’s most damaging publication on the subject.

“In it he essentially says that the root of homosexuality is selfishness,” Kulisch explained.

“To reference Jesus’ parallel as shepherd looking out for his sheep, he’s asking what kind of steward the church will be,” Kulisch continued. “If Proposition 8 is the church’s response [to that question], then I’m very disappointed.”

Josette Vermillion expressed disappointment that the Utah-based LDS church sought to involve itself in another state’s politics.

“I don’t think the LDS church should’ve stuck their nose in California’s business,” she said. “They already own a state.’

Gay, lesbian, bisexual and transgender people weren’t the only ones taking to the streets to express their disgust. Near the church’s headquarters Jeremy Mathews kissed his girlfriend (and domestic partner) Janine Parker as he held up a sign.

“To me it’s a simple matter of equality,” said Matthews, who will not wed Parker until gay marriage is legal. “You didn’t have to be black to be part of the civil rights movement, and you don’t have to be gay to be involved in marriage equality.”

Walking hand-in-hand with her bisexual friend Tracey Thomas, Marci Woodward agreed. Like many at the protest, Woodward filed a complaint against the Mormon church with the IRS, saying that the church had violated its tax exempt status by involving itself in the Yes on 8 campaign.

Noting a group of protesters chanting President-elect Barack Obama’s campaign slogan “Yes we can!” Thomas also noted that Obama’s victory in the polls may have contributed to the rally’s size.

“After the election I think many of us are truly energized,” she said. “The fact we’re in the streets [shows that]. Oh, God, I love that. We should have been in the streets long before.”

She also marveled at how quickly the gay rights movement had grown.

“Twenty years ago we wouldn’t be having this conversation [about gay marriage],” she said.

But not everyone at Temple Square was there to protest Proposition 8. A small but vocal group of counter protestors assembled on the City Creek Park’s southwestern corner and near the Temple’s northern gate. Waving signs reading “Marriage Between A Man and A Woman” and “Not About Equal Rights But Tradition” these counter protestors exchanged heated words with Proposition 8 opponents.

“You will never be a man and a woman!” one woman shouted through a bullhorn.

Kevin Goms, an LDS man and a former California resident. Standing on the sidewalk next to his wife, Goms quietly held a sign.

“We believe marriage is between a man and a woman and only a man and a woman,” he said. “But we’re out here to show [the protesters] that we love them. We don’t hate them, but we don’t approve of what they do.”

Although both sides exchanged a few heated words, police kept protesters from coming to blows. And as of 7:54 p.m. Jones said police had not received any incident reports and had made no arrests.

“As far as we’re aware this is a pretty peaceful protest,” she said.

Although church offices were lit up, only a handful of employees could be seen observing the protest below. Diners and visitors inside the nearby Joseph Smith Memorial Building (also located on Temple Square) regarded passing protesters with stiff smiles, or with cheerful waves in return.

Shortly before the protest, the LDS church released the following statement, which read in part:

“It is disturbing that The Church of Jesus Christ of Latter-day Saints is being singled out for speaking up as part of its democratic right in a free election. …

“While those who disagree with our position on Proposition 8 have the right to make their feelings known, it is wrong to target the Church and its sacred places of worship for being part of the democratic process.

“The church also called on individuals on both sides to behave “in a spirit of mutual respect and civility towards each other.”

Whipple specifically planned the protest for Nov. 7 to coincide with similar protests in California. These included demonstrations at the LDS temple in Westwood and a massive protest in Los Angeles the day before. A protest in San Diego is also planned for the evening of Nov. 8. 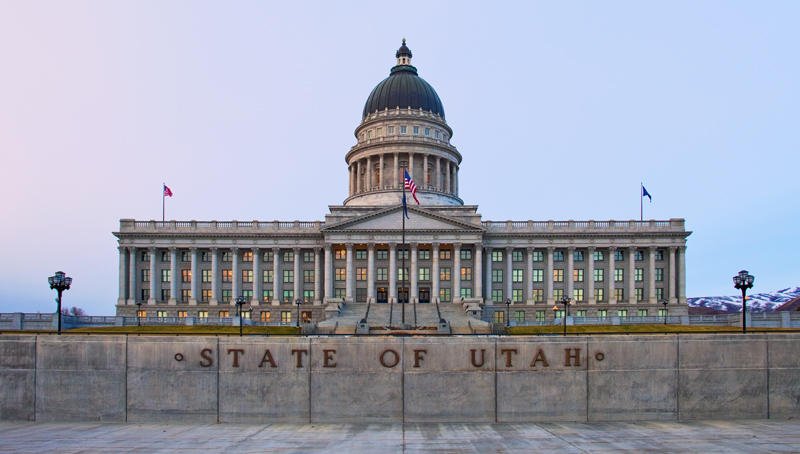