Taking advantage of momentum following the apparent passage of California's Proposition 8, Equality Utah called a press conference for Monday, Nov. 10 at noon in its offices.

"Over this recent election cycle, there has been much emotion around California’s Proposition 8 – emotion on both sides of the issue – and these emotions have been especially high here in Utah, home of the LDS Church, which played a visible and active role in the Yes on 8 campaign," said Equality Utah Board Chair Stephanie Pappas.

"While we disagree with the LDS Church’s position on Proposition 8, we respect that their position is based on the guiding principles of their faith. Throughout the campaign, while the LDS Church stated its support of Proposition 8, it also made repeated comments that the Church 'does not object to rights for same-sex couples regarding hospitalization and medical care, fair housing and employment rights, or probate rights.' Just last week, Elder L. Whitney Clayton stated the LDS Church does not oppose 'civil unions or domestic partnerships,'" Pappas continued.

In response, Equality Utah has drafted five bills for the upcoming legislative session in January, and the group is "taking the LDS Chruch at its word" that they will support the legislation.

Will Carlson, Equality Utah Manager of Public Policy, spelled out the five bills:

1. Hospitalization & Medical Care
Most gay people with insurance cannot insure their family. This bill will mandate that insurance plans, which extend benefits to an employee’s spouse, also cover an employee’s partner. When insurance plans cover families, they should cover every family member.

2. Fair Housing & Employment
Currently, it is legal to fire a person from her job or evict a person from his home just for being gay or transgender. The Fair Housing and Workplace bill will expand on HB 89, introduced by Representative Christine Johnson in the 2008 session. It will add sexual orientation and gender identity to the list of
characteristics employers and landlords may not consider when making employment or housing decisions.

4. Domestic Partner Rights & Responsibilities Act
The term “marriage” has proven to stir up many conflicts. Aside from marriage, we can do much more to help committed couples care for each other. This bill creates a statewide domestic partner registry as exists in California and attaches rights of inheritance, insurance and fair housing.

5. Repeal of part 2 of Utah’s Amendment 3
A registry that covers inheritance, housing, and insurance is not the legal equivalent of marriage. Yet the second part of Amendment 3 has been misinterpreted to avoid any recognition of gay couples. Laws that deny basic protections under the law should be repealed. This bill will repeal the portion of
Amendment 3 which states “no other domestic union; however, denominated, may be recognized as marriage or be given the same or substantially equivalent legal effect.”

"We are taking the LDS Church at its word regarding these basic protections and we hope to gain their support as we work to secure these rights and responsibilities," Carlson said.

"While our position on marriage equality may differ from the LDS Church’s position, I believe we share the desire to provide protections for gay and transgender Utahns — protections that do not compromise the Church’s position on, and definition of, marriage," said Equality Utah Exectuive Director Mike Thompson. "Proposition 8 has created a great divide. Now is the time to look for opportunities to bridge that divide and create the needed protections, rights and responsibilities for Utah’s gay and transgender people. This will be Equality Utah’s focus and we ask the LDS Church to support these efforts."

1. The LDS Church has stated that it does not oppose same-sex couples receiving such rights as “hospitalization and medical care, fair housing and employment rights, or probate rights?” Will the LDS Church be willing to support efforts to secure these rights?

2. Is the LDS Church willing to assign a member of its Presidency of the Seventy to lead Church efforts to secure these rights, just as it did with Proposition 8?

3. As it did in California, will the First Presidency draft a letter to Utah Latter-day Saints in support of rights and protections for gay couples?

4. As it did in California, will the First Presidency ask for this letter to be read to all Utah congregations on a specified date?

5. Will the First Presidency ask that all members of the LDS Church do all they can do, including “donating their means and their time”, to assure that gay couples receive such rights as hospitalization and medical care, fair housing and employment rights, or probate rights” — just as it asked
its members to do in support of California’s Proposition 8?

6. Will local Church leaders provide information to its members about how to get involved in supporting such rights, just as it did in California?

7. Finally, we ask members of the LDS Church, will you ask your church leaders to support these efforts?

"As the Church called for collaboration to achieve a better society, we hope there will be a demonstration of these convictions. Regardless of one’s position on marriage equality or beliefs around sexual orientation and gender identity, rights and responsibilities are needed for gay and transgender people and their families," Thompsaon finished. "We agree with the LDS Church, we can achieve a better society…if we work together. We hope the LDS Church will respond with a resounding YES and demonstrate its true convictions on these issues."

On Sunday, Nov. 9, Equality Utah gathered dozens of gay activists and non-gay allies to announce their intentions. Ranging from leaders of Log Cabin Republicans to Utah Stonewall Democrats, rally organizer Jacob Whipple to radio producer Troy Williams, the consensus in the room seemed to be a consensus of agreement that the bills were the logical next step.

Sen. Scott McCoy told reporters that he had a conversation with a representative of the LDS Church about the press conference and "looks forward to continuing the dialogue to find areas where we can come together on."

Asked whether Utah would be taking a step backward if the second part of Amendment 3 were to be reconsidered, McCoy said, "This is not a step backward; this is a stef forward, clearly."

"There was a lot of discussion and a lot of concerns about the second part of Amendment 3," McCoy continued. "I don't think continuing dialogue is necessarily a bad thing."

Rep. Christine Johnson, who last year sponsored House Bill 89 Anitdiscrimination Act Amendments which will be retooled to be the Fair Workplace and Housing Act, said, "I, for one, am very excited. My family members are excited as well. I'm delighted and very excited to move that forward to include fair housing. As a real estate agent, I was bewlidered that we didn't include fair housing originally."

"Not all members of the conservative side of the legislature are immediately closing the door to this idea," Johnson continued. "We had very candid conversations behond closed doors where they could ask questions that they might not feel comfrotable asking in committee. This is an opportunity to educate the community and our colleagues and it is something we look forward to doing."

Rep. Jenn Seelig said she had "several conversations with neighbors about their pain about what was going on in California."

One reporter asked about  some of the rhetoric in newspaper story comments and blogs after the passage of Proposition 8, saying it was hateful against the LDS Church.

McCoy replied that "one of the great things about this country is the first amendment. Coming off of Proposition 8, which many were heavily invested in since it was an issue of fundamental human rights for gay and lesbian people, some of the community took advantage of that right and used it as a safety valve expression. And that is all well and good and needs to happen. It's a catharsis. Now it's time to back down and say, now that we are here, it's time to move forward."

"It's time to channel our energy and anger and disappointment into channels that will help us move understanding forward," McCoy continued. "That is what we are trying to do here. We are looking for a way to move this dialogue forward."

Will Carlson ended up the conference saying, "The federal government has delineated over 1,100 rights and responsibilities that come with marriage. With insurance benefits, fair workplace and housing, and probate rights, we are looking for three." 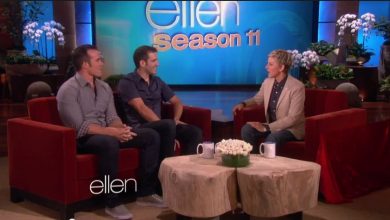 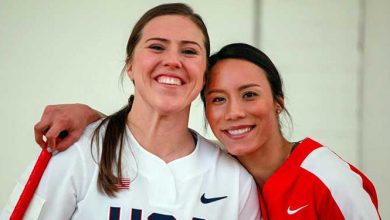 Partners in life, Rivals at the Tokyo Olympics 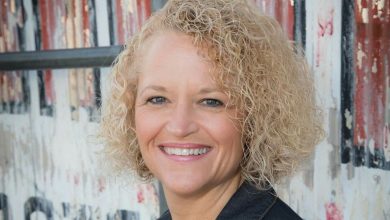