Photographer John Trobaugh’s works have been censored in the past, he himself has been escorted off the Temple Square grounds and yet, he has been commissioned as a participating artist in the Salt Lake Art Center’s Liberties Under Fire: The ACLU of Utah at 50 exhibition. Plus, since the exhibit’s opening in October, at least one other local gallery has shown interest in showing Trobaugh’s photographs. 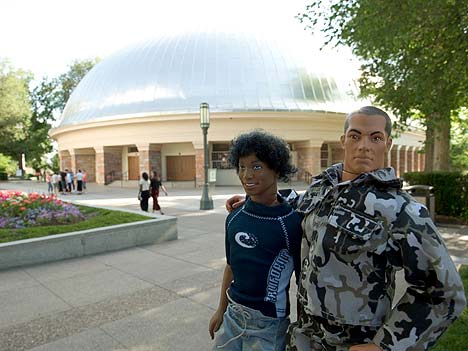 TONY HOBDAY: I recently read that as a child you played with dolls as a way to escape. Today, are your photographs an extension of that escape and how would you describe their importance to you and, hopefully, to the public?

JOHN TROBAUGH: Although they did begin as a way to escape, I see the images as a source of power as well. The power to see things as they might be. So the current series is an effort to take the dolls into the American landscape (metaphorically and literally) and photograph them and their relationships in this context. This will allow the photographs to transform a landscape, seen for the most part as straight, into one that is friendly for all including GLBTQ but also one that blurs the racial segregation that I see even in the GLBTQ community.

TH: Explain the significance of the landscape backdrops in your photographs.

JT: I find landscapes inspiring. I think the place should have significance, even if the viewer can’t immediately identify it. For every photo session I have I end up meeting both nice and not-so-nice people (one lady in a Salt Lake neighborhood told me I was in the wrong state to do these photographs). For me, that is part of the process. I don’t think the images would mean as much to me if I just used Photoshop to drop in a background. I find I react to the landscape in a meaningful way.

TH: You have taken photos in Utah featuring certain landmarks. Tell us a few and why you picked them.

JT: The best story I have from Salt Lake City is getting kicked off Temple Square. Although there are no signs forbidding photographs, and the space is treated as if it were public, I was escorted off the campus and told I was not allowed to take photographs. They said they had never seen anyone take photographs of dolls before but they were “afraid they might be used to make fun of them.” In addition, they asserted copyright to the compound and told me that I would not be allowed to publish them without the LDS administration’s approval. What they didn’t realize is that “fair use” is applicable when a copyrighted image or object is used to make a social commentary. I dare say that the G.I. Joe and Ken dolls, as an inter-racial couple in front of the Tabernacle is a social commentary. Interestingly, the docents that approached me before the guards noticed me really thought it was a great thing that I was photographing the dolls that inspired me as a child in front of the most inspiring place in the world.

TH: Your Double Duty Series was censored from exhibition a few years ago. How difficult has it been since then to show the series elsewhere?

JT: I can get individual photographs in group shows, but since the censorship — to see my work in a group — the shows have been sponsored by the Andy Warhol Foundation. I have literally been told by museums and cultural arts foundations that because their funding is tied to public opinion they could not risk showing my work — even though they think my work is of great artistic value. Although, because of [Liberties Under Fire], the A Gallery [in Salt Lake City] has expressed an interest in showing my work. 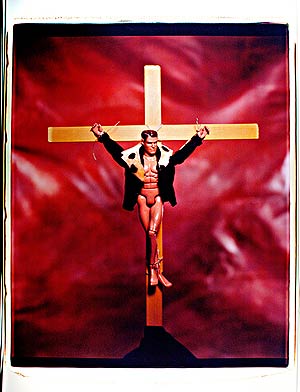 TH: One photo —“The Passion of Hollywood” — is particularly interesting for obvious reasons. Would you give us insight on its conception?

JT: This photograph is a large-format Polaroid — it is 20 by 24 inches. I had to rent the Polaroid studio in New York City for a day to create this series of images. The backdrops for all these images were painted by me on a scale of about five foot by six foot (except the sauna scene).

I can’t tell you what the image means, because I genuinely would like for everyone to take from it what they create in their minds. So it would be interesting to me for you to tell me what it means to you. What I can do is tell you the context and what I was thinking as it was created. The Passion of Christ movie was in theaters and this was a metaphorical response to both the movie and the director, Mel Gibson. Plus, I thought the doll looked somewhat like Mel Gibson.

This is a complex image though; on the surface there is humor, the backdrop is very serious and I painted it feeling real emotion and angst. I think a lot of people see the passion of Christ this way, but Gibson decided to make a Hollywood version of it, with his personal morals meshed. 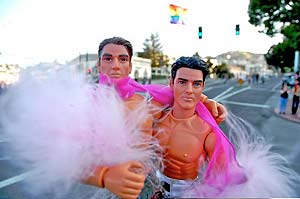 TH: The doll photographs evolve from drawings. Are you still doing drawings and exhibiting them?

JT: I do still do my drawings, I will exhibit them from time to time, but mostly my drawings right now are like the precursor to the photographs rather than the end product. Q

Liberties Under Fire: The ACLU of Utah at 50 exhibition runs through Jan. 31 at the Salt Lake Art Center, 20 S. West Temple For more information visit slartcenter.org . To learn more about John Trobaugh and his work, visit his Web site www.johnart.com. 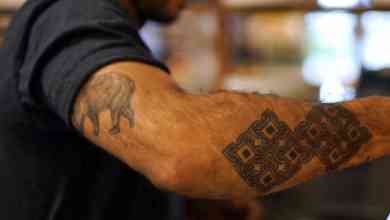