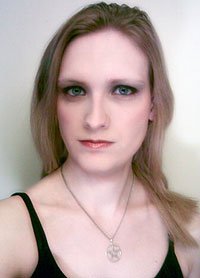 When Ayla Rowley began working for Larry H. Miller’s Megaplex Theatres in 2006, she identified with her male birth sex and went by the name Garret. And for awhile, everything was fine.

“I got promoted about four times in my first year by the company,” said Rowley. And when the company prepared to open its new Ogden location, Megaplex 13 at the Junction Utah, in June 2007 she applied for the position of assistant manager.

“I never figured I’d be a manager, but I thought I’d at least give it a shot,” she recalled. But despite her reservations, Rowley landed the position of assistant manager and moved north from her job at Megaplex 20 at The District in South Jordan. She took to her new job immediately: her team felt like her family and the theatre felt like home. It was the perfect situation, save for one thing.

“I was doing great at work, but it was very difficult for me because I was living a double life,” she explained. “At work I was Garret Rowley, and at home I was Ayla.”

Although Rowley had known she was transgender for several years, she said she always figured she would always come to terms with her gender identity “further down the road.” In January of this year, however, she realized there could be no more delaying, and with that realization came another, this one far scarier: Could she keep her job?

Rowley figured she couldn’t. And not because of Megaplex’s reputation as an anti-gay company. After all, she had joined its staff well after owner Miller’s controversial decision not to let Brokeback Mountain play in his theatres because of the film’s gay content. And Miller apologized for his decision in 2007, saying that he would have probably decided to show the film if he could make the choice again.

“I was really scared [and] I don’t really think it had anything in particular to do with the company, but everyone I think has that natural fear when they’re coming out, especially in the workplace,” Rowley explained. “And we do live in Utah, which doesn’t have any [workplace protection laws] based on gender identity.”

Ultimately, Rowley figured she would have to leave her job and find a new job after transitioning. With that scenario in mind she approached human resources manager Kathy Farrow intending to be fully honest.

Many gay, lesbian, bisexual and transgender Utahns know this story well, if only because it has ended badly for them in the form of arbitrary firing, workplace harassment, or a desperate search for legal recourse.

But this is not one of those stories. Instead of insisting that she would have to leave, Rowley said Farrow looked at her and said, “I think you’ll be kind of surprised.”

“[She asked,] How do you want to do this?’” remembered Rowley. “‘Did you want to go on vacation and come back as a woman?’”

Stunned, Rowley said she told Farrow that she thought she would have to quit.

“And she said, ‘No I don’t see any reason for that,’” said Rowley. “’You’re an incredible worker, you’re an asset for our team, we love you to death, and you’ve done incredible things for us.’”

Farrow, unfortunately, was not available to comment on this story by press time.

With Farrow’s pledge to make Rowley’s transition “as smooth and comfortable for you as we can,” Rowley said she took two weeks of vacation time in October to undergo gender reassignment surgery. While she was gone, she said Farrow and the human resources department spoke to the Megaplex 13 employees about her transition with Rowley’s permission.

“Honestly at that point, almost everyone knew at work,” said Rowley. “Maybe some of the newer hires didn’t know, but the vast majority of people knew because they had become my friends, you know? And I’m very open with my friends.”

And her first day on the job as a woman went “incredibly smoothly,” despite Rowley’s fears. It has been smooth sailing ever since, she said.

“I haven’t had one problem, or anyone causing any kind of trouble, I’ve had nothing but support from every manager and team member who works for us. It’s really been incredible. … They’re all very protective of me.”

And all, she added, includes employees who are members of all religions, including the Church of Jesus Christ of Latter-day Saints, which made headlines this year for its support of a California measure to re-ban gay marriage in the state.

“I did expect it, especially in a very conservative state,” she said. “I think most people would consider our company very conservative, but truth be told I could have never dreamed prior to that day … [that] they’d be completely supportive of this.”