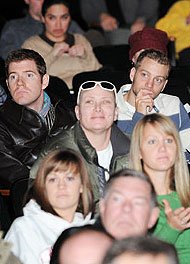 To address and help channel the recent surge in gay rights activism in the wake of Proposition 8’s passage, several of Utah’s gay rights groups held a town hall-style meeting in the Tower Theatre on Dec. 14.

In his opening remarks, local activist Jacob Whipple told the crowded theatre that he had asked the groups to come together so that “we could all get on the same page as the community.”

“It’s important that our organizations mirror us,” he said.

After representatives introduced their organizations and explained their plans for securing equal rights for gay and transgender Utahns in the upcoming legislative session, Whipple invited the audience to ask questions and discuss their ideas and concerns. Some points raised included the effectiveness of signing online petitions supporting Equality Utah’s Common Ground Initiative and the importance of gay and transgender people doing volunteer work in their communities. One audience member mentioned, for example, that he and several friends had spent the weekend shoveling driveways and passing out literature about gay and lesbian equality.

Bryan Glick of Utah Stonewall Democrats agreed that coming out is one of the best things gay and transgender people can do in their fight for equal rights.

“It’s really hard to discriminate against somebody you see every day as an equal,” he observed.

Attendees also challenged the different groups to work more closely together when coordinating email blasts, Facebook messages and phone trees, to ensure that members of the community did not become inundated. They also suggested that Equality Utah could gain more traction for its fair housing and workplace bill by extending it to cover an individual’s political affiliation, which is not a part of Utah’s nondiscrimination laws.

At times, the discussion grew heated, especially when it touched upon such hot button issues as racism and classism in Utah’s gay community.

John Spillman of the Proud People of Color Network commented that a survey put out by the Utah Pride Center seeking feedback for the meeting was insensitive to people of color.

“We were turned off by [the parts] that said, ‘if you’re a person of color, answer these questions,” he said. “We shouldn’t be asking [people of color] to do all the work.” He also mentioned that he knew of few white queer people who had protested anti-immigrant legislation, an issue which is of importance to many people of color.

Equality Utah’s executive director, Mike Thompson, who is Hispanic-American, apologized for not doing enough for queer people of color.

“You do what’s right in front of you and sometimes you forget to look at the broader picture,” he said. “But I commit to this community and the community at large that when we have our next meeting we will have made real progress on this issue.”

Spillman also stated that activists need to look at how their goals, such as securing hate crimes protections for gay and transgender people, would effect the community at large, including people of color, women and people with disabilities. RadioActive host and QSaltLake columnist Troy Williams agreed, adding that he would like to see the gay community throw its support behind other the goals of “social justice” groups, such as those supporting environmental protection, universal health care and women’s reproductive freedom.

“If we all worked together, we might be able to turn the tide,” he said.

Continuing the theme of working together for the community’s benefit, Rep. Christine Johnson, D-Salt Lake City, organized a food drive at neighboring Continental Cleaners to help the Crossroads Emergency Food Pantry and the Utah Aids Foundation Food Bank. Before the meeting began, Johnson and volunteer Linda Hilton estimated that they had received 300 pounds of food and would likely “hit 1,000 pounds” by the meeting’s end.

Her dog in tow, Johnson said that it was “inspiring to see a room full of people who give a damn” and encouraged attendees to speak to their legislators in the upcoming session. In discussions with her colleagues, Johnson said discovered that other representatives and senators ranked gay and transgender issues “above abortion and so many other things” in this session. The time for speaking out, she said, has never been more crucial.

In his closing remarks, Whipple asked the representatives to meet and compare notes after the holiday season. He also mentioned that he would like to make the town hall meeting a quarterly event.

BYU ranked near last in the national sexual health survey