Eleven gay bars in Seattle have received letters that their clients will be targeted with exposure to ricin, a deadly poison.

“Your establishment has been targeted,” started a letter to Re Bar. “I have in my possession approximately 67 grams of ricin with which I will indiscriminately target at least five of your clients.”

A similar letter was sent to the The Stranger to the attention of “Obituaries:”

“Please be prepared to announce the deaths of approximately 55 individuals all of whom were patrons of the following establishments on a Saturday in January.”

The letter went on to name eleven gay bars in Seattle.

“I could take this moment to launch into a diatribe about my indignation towards the gay community; however, I think the deaths will speak for themselves,” the letter finished.

A phrase of the original letter:

All I can say is the targets won’t care much that they’ll be dead and nearly frozen, just as, presumably, they didn’t care that they were living…

was found to have been lifted from a 1996 collection of poems written by Mark Doty. In “A Display of Mackerel,” written after the HIV-related death of Doty’s partner in 1994, he wrote,”

just as, presumably,
they didn’t care that they were living

“It’s hard for me to describe how horrified I feel by this,” Doty wrote on his blog. “So — now here are my lines twisted to a new context, and what was intended to suggest consolation is instead bent to an occasion for creating fear.”

The Seattle Police Department released a statement that they are pursuing the criminal act, “actively investigating and coordinating with the FBI and other federal partners.” 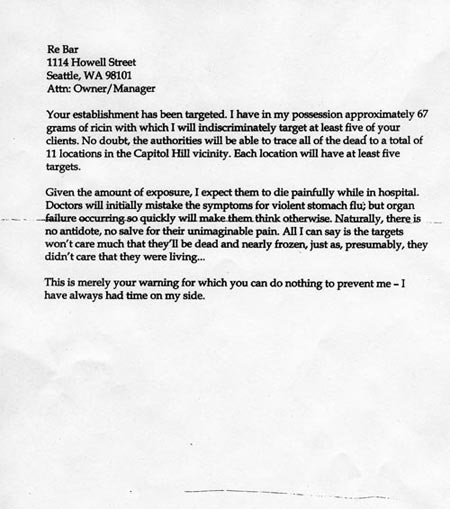 Seattle bars are warning patrons to not leave drinks unattended and to watch for any possible symptoms of ricin poisoning, including vomiting, diarrhea within 6–12 hours and, potentially, hallucinations, seizures and blood in the urine. THe CDC notes that exposure to ricin, while it has no antidote, is not invariably fatal.

A pub crawl is being organized in defiance of the author’s motives.