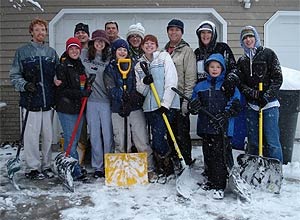 Pride in Your Community, a service organization spawned by activism after the passage of California’s Proposition 8, has held community service projects like shoveling neighborhood walks of snow with the goal of creating dialogue over the issue of same-sex marriage rights.

On Jan. 17, their monthly service event was passing out pumpkin bread through the neighborhoods represented by Sen. Chris Buttars and Rep. Greg Hughes, both staunch conservatives known for their stances against anything gay-positive.

“We decided to go for the gusto, and started with Senator Chris Buttars who is most commonly portrayed as ‘Public Enemy No 1’ to the LGBTQ community,” said Eric Ethington, one of the groups’s founders. “Imagine our surprise, when with very little hesitation, the senator invited four of us into his home and spent an un-interrupted 45 minutes with us.”

The four group members spoke at length with Buttars about bills sponsored by Equality Utah, collectively dubbed the “Common Ground Initiative,” focusing on bills that would provide housing and workplace protections in Utah, whereas now it is legal to both fire and/or evict someone soley due to sexual orientation.
“Senator Buttars made it clear that, while he is by no mean pro same-sex marriage or many other gay rights, he is definately opposed to those two kinds of discrimination,” Ethington explained.

After speaking with both Buttars and Rep. Hughes, Ethington was struck with the thought that it may make sense to approach more conservative legislators for their involvement in drafting future legislation.

“How can we expect to change people’s hearts if we don’t sit down and talk to them,” asked Ethington. He encouraged people to “sit down with whomever you can and explain exactly why [gay and lesbian legislation] matters so much to us. That this is not some liquor or speed limit law. This is our lives that we’re fighting for, and the votes that these men and women cast will have a direct impact on our day to day lives.”

Buttars told the four that this was the first time he has spoken to a “pro-gay” group. A little pumpkin bread goes a long way.

Ethington’s own story on the event from his blog