Organizers of tomorrow’s March on the Capitol for the Common Ground Initiative are hoping tomorrow’s weather forecast doesn’t dissuade people from attending an important rally.

“The weather prediction for rain tomorrow is lamentable, but our fight for LGBT Rights is not going to be easy and will be uphill most of the way,” said Jacob Whipple. He said he will not call off the rally on account of rain.

“I would rather see those braves souls who truly want equality, who truly want an end to government sanctioned discrimination to come with umbrellas and coats to show our legislators that there is support and a dire need for the Common Grounds legislation to pass,” Whipple continued.

The march will start at 2:00 p.m. on the west side of the Salt Lake City-County Building at Fourth South and State Street. It will travel up State Street seven blocks to the Utah State Capitol grounds where a rally in support of a group of gay rights bill drafted by Equality Utah will take place.

The Common Ground Initiative is a series of bills being put up during the 2009 Utah State Legislative Session, which starts on Monday, January 26. The bills address health care for partners, fair employment and housing, wrongful death, a domestic partner registry and a clarification of Amendment 3, Utah’s constitutional amendment banning marriage other than between a man and a woman as well as banning recognition of any similar union.

The initiative was spawned by statements made by LDS Church leaders during the campaign for California’s Proposition 8 that the church does not oppose certain rights for gay and lesbian couples.

Recent polls have shown support for some of the measures. The LDS Church has released no statement on the package of bills, though they were announced in early November.

“Let us show that neither inclement weather nor persecution will prevent us from demanding, as President Obama stated, ‘the God-given promise that all are equal, all are free, and all deserve a chance to pursue their full measure of happiness,'” Whipple finished.

Outlaws, a newly-founded group for “law students  working for a fair and just Utah” will be gathering for lunch at Stoneground Pizza, 249 E. Fourth South, Saturday at noon. More information at [email protected] 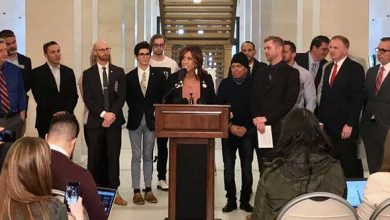