Nearly 300 marchers braved the rain, wind and cold on Jan. 24 to ask the Utah legislature to pass five bills — collectively known as gay rights group Equality Utah’s Common Ground Initiative — that seek to grant gay and transgender Utahns nondiscrimination protections in housing and the workplace, insurance benefits for same-sex partners, and the ability for same-sex partners to sue in the case of wrongful death as well as the creation of a statewide domestic partner registry and the repeal of a constitutional ban on civil unions.

The marchers met at the Salt Lake City and County building and walked uphill to the state capitol, bearing umbrellas, waterproof signs and sometimes chanting the familiar slogan: “What do we want? Equality! When do we want it? Now!” Several drivers demonstrated apparent support for the marchers, honking, waving, and occasionally stopping to ask what the group was doing. Salt Lake City police were on hand to provide an escort.

After the marchers had assembled on the state capitol’s south lawn (in front of tents erected to protect the sound equipment from the rain), local gay rights activist Jacob Whipple thanked them for braving the elements.

“Thank you for coming from the bottom of my heart,” said Whipple, who organized a 3000-strong protest against Proposition 8 (the measure that re-banned gay marriage in California) at the LDS Church headquarters last November. “It means so much that you would come out in the rain.”

Whipple then turned the microphone over to Rev. Sean Parker Dennison, minister at South Valley Unitarian Universalist Society, and one of the only open transgender Unitarian clergy in the country.

“My faith is at the heart of my story, and why I’m here looking for common ground,” said Dennison, adding that he transitioned 12 years ago to stay true to a faith that “told me to strive for wholeness and honesty among all people” and “to live with integrity and joy.”

Explaining that transgender people were more likely than the rest of the population to be unable to find housing and healthcare, Dennison said he was lucky to have both, considering that Utah law currently does not extend workplace and housing nondiscrimination provisions to transgender people.

“But at any minute I could lose any of those things,” he said. “No one should have to rely on luck for those things.”

The ideals of justice and supporting the “weak and powerless” in society, Dennison added, were the common ground not only of all world religions, but the common ground on which legislators, the LDS Church and gay and transgender people could agree.

“I believe there are politicians in this house who know the ideals of democracy … are vital to this state,” said Dennison, gesturing at the capitol behind him. “I believe the era of hatred, discrimination and prejudice is coming to a close. I hope Utah will surprise the world and lead the way.”

Joni Weiss, a transgender woman, told the crowd that she, like Dennison, was also lucky to have a transgender-friendly employer.

“But most people in my situation aren’t so lucky,” she said. “There aren’t many because of discrimination and harassment and the potential for violence who would be able to stand up here. I stand up for those who can’t speak on fear of losing their jobs and homes.” 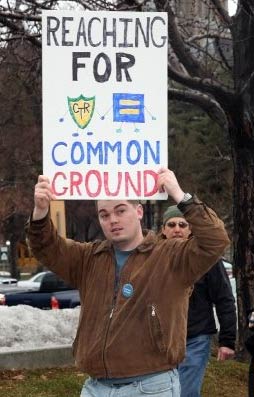 Weiss urged the marchers not only to reach out to the legislature, but to remember their allies of all sexual orientations in such “rural” Utah cities as Moab, Roosevelt, Cedar City and Vernal, who would have “covered the hill” had they been able to attend.

Other speakers included Thomas Rowbottom, a bisexual man from Sacramento, California, and Alex Bright, a gay man from Florida. Rowbottom describing how he lost his job at a hospital chain because of his sexual orientation. Even in states known for being gay-friendly, Rowbottom said, anti-gay discrimination is a problem.

Upon moving to Utah earlier this month, Rowbottom said he thought few people in the Beehive State cared about gay rights. But after seeing support for demonstrations like that day’s, Rowbottom said he was convinced that “the fight is not dead in Utah.”

Bright discussed Florida’s Proposition 2, a constitutional amendment defining marriage as the union between a man and a woman that Florida voters passed last November. He mentioned gay friends in his former home state who had been left with nothing after their partners had died because relatives who disapproved of their relationships had inheritance rights.

“We need to stand up and fight and show people we’re out there,” he said.

Whipple agreed, urging all present to come out of the closet to friends, family and co-workers, not to get approval, but to let their loved ones know “those people they’ve loved are people who are LGBT” and that “the opinions they’ve formed about us still hold.”

He also discussed the importance of involving straight people in the push to pass the Common Ground Initiative.

“In a fight of numbers we’re not big enough,” he said. “We can’t win this fight alone.”

Equality Utah director Mike Thompson was one of the last speakers to address the crowd. In his remarks, Thompson discussed three recent polls, conducted by the Salt Lake Tribune, the University of Utah and Equality Utah itself that each determined that a majority of Utahns support equal rights for gay people “on some issues” such as housing and employment protections.

He urged legislators who would meet together for the first time on Jan. 26 to heed their constituents’ opinion.

“It’s not the Utahns that we need, we need the folks in this house to pay attention to the majority of Utahns,” he said. “Utahns are paying attention to who we are and that our lives are relevant.”

Thompson also called for an end of legislators’ attempts to center debates about protections for gay people around marriage equality and Amendment 3, the constitutional amendment forbidding gay marriage in Utah. Voters overwhelmingly passed the measure in 2004.

“I’m tired of legislators hiding behind Amendment 3 when we’re talking about issues of discrimination,” Thompson said to applause. “The fact a lesbian can be fired from her job has nothing to do with marriage.”

Once again, Thompson also called on the LDS Church to make good on a statement it made last November. In the wake of the church’s official support for Proposition 8, LDS leadership stated that the church was not anti-gay and did not oppose employment, housing, probate and medical insurance rights for same-sex couples, as well as domestic partnerships.

At press time, it has been 75 days since Equality Utah announced its Common Ground Initiative and the LDS Church has yet to respond.

“We’re waiting, LDS Church. We’re waiting until your actions are consistent with your words,” said Thompson. “Where is that same conviction you showed when fighting for Proposition 8?”

To learn more about the Common Ground Initiative visit equalityutah.org.

BYU valedictorian in graduation speech: ‘I am proud to be a gay son of God’