The anti-gay group America Forever spent the last week protesting the governor for his revelation that he supports Equality Utah’s Common Ground Initiative, disrupting both Equality Utah’s and Californians Against Hate’s press conferences, and now publishing a full-page, full-color ad in The Salt Lake Tribune.

“Stand Up & Stop the Homosexual Movement” was emblazoned across the top of the ad, followed by, “Shame on Governor Huntsman for joining and adding to this public shame by endorsing the Common Ground Initiative,” and “Shame on Utah Gays for Using the LDS Church to promote the homosexual Movement.”

The ad went on to say that, should the term sexual orientation be added to Utah law, “the open representation of Homosexual conduct then would be forced, by the law, into acceptance in very environment of society.”

Equality Utah, the ad says, is using “coercion tactics” and misleading poll results to get the initiative passed. “Consciencely [sic], they are using the LDS church’s statements as a shield to numb the public conscience of their religious duty and rights.” 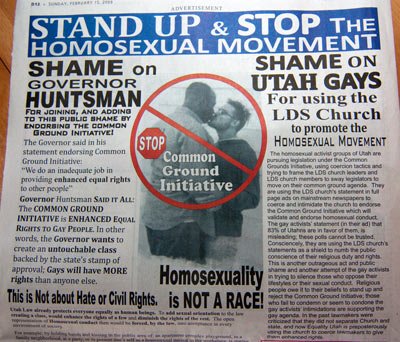 The ad also goes on to quote a satirical rant written under the pen-name Michael Swift of Gay Community News in 1987 while making it appear that Equality Utah is the author, “We shall sodomize your sons, emblems of your feeble masculinity…” It also erroneously attributes an article printed in Guide Magazine in 1987 to the Human Rights Campaign and the ACLU called “The Overhauling of Straight America,” which states “In any campaign to win over the public, gays must be cast as victims in need of protection so that straights will be inclined by reflex to assume the role of protector…”

Both articles are widely used by ultra-conservative groups, yet are relatively unknown to the gay community. The first paragraph of the Swift article says, “This essay is an outré, madness, a tragic, cruel fantasy, an eruption of inner rage, on how the oppressed desperately dream of being the oppressor.” Yet, that paragraph is always stripped by conservatives seeking to use it against the gay community. Also lost on the conservatives is the nod in the pen name to Jonathan Swift, who wrote Gulliver’s Travels and the essay “A Modest Proposal,” which satirized the selling of children to rich people for food. The Guide Magazine article was widely dismissed.

The address of an executive suites virtual office building is listed, along with a phone number which shows as “unlisted” in phone directory services.

Who is America Forever?

The group was started in 1999 by Sandra Rodrigues and her then-18-year-old brother Jonas M. R. Filho. Filho acted as president, registered agent and secretary and Rodriguez was vice president. Josie Ann Rodrigues was listed as treasurer. News reports over the past decade have always referred to the group as being made of of Rodrigues’ family.

On the group’s Web site, the home page reads, “Do Not Be Fooled By Equality Utah and The Common Ground Initiative,” a statement available on the group’s Web site says. “They are using intimadation [sic] to gain ground and are lying to the public, ALL THEY WANT IS MARRIAGE RIGHTS to valdite [sic] their relationship of the same-sex!!! THEY ALREADY HAVE THE RIGHT to Marry, a gay man can marry a gay woman! If they want Marriage Rights then get married, but we cannot afford the same rights of Marriage to other relationships for it will devaluate [sic] Marriage and change society’s perception of what Marriage is!!!”

The group advocates the term “anti-species” instead of homosexual, lesbian and gay, on the grounds that homosexuality does not continue the human species. Its literature says that the mention of homosexuality to anyone younger than 18 should be a crime, and sexual practices that do not lead to children should be banned.

Rodrigues immigrated to the United States in 1975. Indeed, several years of the group’s efforts were around the rights of children born in the United States to undocumented immigrants. They started an initiative called “Save the Innocence” calling on the government to address the problem.

The group came to the attention of authorities in 1999 after complaints from the Mexican consulate said it was selling identification cards for $200 to illegal residents that ask the Immigration and Naturalization Service not to deport them. The money also allowed them to place their pictures in a book that was given to politicians in Washington, D.C., to explain the plight of illegal immigrants whose children are citizens.

The consulate and state residents complained to the Idaho and Utah state commissions on Hispanic Affairs.

It was decided that, while the identification cards were worthless, they were not illegal.

The campaign Save the Innocence immigration campaign fizzled in 2001 the rhetoric on their Web site turned to anti-gay content.

The group has remained quiet, other than updating their Web site to endorse Se. John McCain in the presidential race, since 2006.

High-resolution images of the ad are at: