Rev. Steve Ford will marry you to your partner while wearing Jedi robes, or even a Darth Vader costume that is a perfect replica of the one actor David Prowse donned in Star Wars.

Or, if you prefer, he’ll wear a suit and tie.

Although Ford likes weddings to be fun, his Jedi robes aren’t a costume, a joke, or science fiction camp. Ford is a member of the Temple of the Jedi Order — also known as Jediism — an online-based church that has members across the world. He is also Utah’s only licensed Jedi minister.

Although the church takes its name from George Lucas’ Star Wars films, the church is not about worshipping Lucas or Obi Wan Kenobi, and its adherents aren’t extreme fans who believe that they are really Jedi warriors.

“Obviously we take our name from the Star Wars film but it’s not about [that],” said Ford, a West Valley resident. “The idea that George Lucas based his Jedi on has been around for thousands of years — he just came up with a combination that hasn’t been done before. We like it, it makes sense to us, and so we adopted the name Jedi.”

Jediism as the church’s Web site, templeofthejediorder.org, explains, is a syncretistic religion — one that combines tenants of several world religions, including Christianity, Buddhism, Taoism and Shintoism. At its heart are beliefs in education, democracy, the “generally positive influence” of most world religions, and the dignity, worth and equality of all humans, regardless of age, race, sex, sexual orientation, disability or national origin. It claims as its past masters figures as diverse as Buddha, Jesus Christ, Mahatma Gandhi and Martin Luther King, Jr. Adherents can come from and identify as any religion as well as Jediist, and the faith is inclusive of all, regardless of age, race, sex, sexual orientation, gender identity, disability or national origin.

Jedi also believe in the Force — not the power in the movies to manipulate objects or shoot lightning bolts per se, but the power of creation.

“To some people it’s God or god/goddess, or Buddha, or whatever,” said Ford. “To Buddhist the force is Zen or nirvana, to Christians, God is the power of the Force. I liken it more to a way of life, because when you call something a religion or a faith that kind of condemns it to a certain predefined notion.”

True to his Jedi beliefs, Ford will marry couples of any faith or sexual orientation, in a ceremony that suits their religious beliefs. And while Utah law currently doesn’t legally recognize same-sex couples, Ford said this doesn’t matter to him.

“The state doesn’t recognize them for now … [and] hopefully they’ll get that changed, but for me it’s a real wedding,” he said. “Sometimes you don’t necessarily need the state to recognize it. You need to. That’s what I do weddings for is to help people get together, to start the rest of their lives together.”

‘There’s a feeling you get when you put on a robe,” he explained. “You’re more dignified and poised, and it’s a part of what you believe. It’s something that’s a cool addition; it’s like a priest wearing [vestments].” And while he admits that some couples may like the robes for “the camp value, he added that his robes have serious meaning, and he won’t wear them if they are considered or treated as a joke.

However, Ford stressed that Jediism is a religion that allows for fun. In fact, he has officiated at a Star Wars-themed wedding in the past—while wearing an 80 pound Darth Vader costume. True to Star Wars lore, the bride was dressed as Princess Leia and the groom as bounty hunter Han Solo. The best man came in a Wookie costume, a reference to Han’s friend, Chewbacca.

“The poor guy was probably hotter than I was,” Ford laughed.  “It’s always interesting when you bring a movie-authentic Vader costume. You can’t see very far in front of you, and you’re in this helmet so all you can hear is your breathing and voice echoing. [You hope] that you catch the “I do” and the vows between the breathing.”

Whether wearing Jedi robes or a more traditional suit, Ford said he is happy to help couples with everything from writing their vows, to personalizing a ceremony. 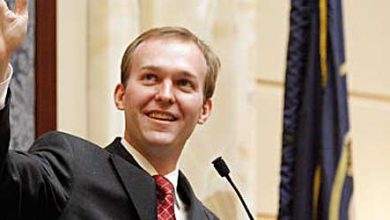 Bronwen Beecher: Preachin’ with a Fiddle