A prominent gay and lesbian blog has named openly lesbian Rep. Christine Johnson one the country’s sexiest out politicians.

On March 11, popular blog Queerty.com listed its choices for sexy out politicians in a post titled “Let’s All Imagine Barney Frank When He was Sort of Sexy.” The post included a photograph of a younger Frank (one of the first openly gay congressmen) beneath this introduction:

“What makes a really good politician? Is it their commitment to voters? A sense of duty to the country? A knack for policy? Boring! This is America, where our royalty are pretty people and our presidents are actors. The key to a great political career is the ability to look both hot and authoritative — the kind of person who, with a wink and a nod, can turn the head of any 18-year-old twink. Here’s our rundown of our favorite gay political sexypantses.”

Johnson, however, was the only female “sexypantses” listed.

“For the ladies, we offer up Utah State Representative Christine Johnson,” the post read. “Honestly, our search for sexy lesbian politicians mainly taught us that the most electable lesbians seem to prefer grandma glasses and perms, but Johnson’s a refreshing exception — still pleasantly dykey (short hair), while also electably ladylike (matching jewelry!).”

“My first thought was, wow, I’ve been to some of the Victory Fund stuff [a campaign to elect gay and transgender politicians], and I thought there were some really hot women there,” laughed Johnson, who added that her inclusion on the list was equal parts surprising, flattering and embarrassing—especially as she calls the photograph the blog used “bad” and noted that she wore her “matching jewelry”— in this case pearl earrings — to look “more conservative” before a legislative committee.

“What do you say when something like that? It’s just one person’s perspective, but I disagree,” she said.

While Johnson said she would rather be recognized for her intellect or legislative experience, she added “To be in any list where Barney Frank is listed is flattering.”

She added also that she had sent the blog an email thanking them.

Blog commenters did not sound off on Johnson’s inclusion, except to note that the post’s writers had an “interest[int] definition of short hair” (Johnson’s hair is shoulder-length). They also suggested Wisconsin state Rep. Tammy Baldwin as another “hot” lesbian politician.

Baldwin’s photo on her Web site also shows that she has short hair and wears pearl earrings. 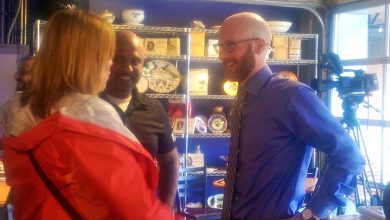 Activist walking across the country to stop in Salt Lake City