Reports of a mega-sized gay protest during the LDS Church’s General Conference in April are greatly exaggerated. Instead of picking up signs and banners, a local gay activist is asking gay and transgender Utahns to pick up litter in parks and food for families in need.

Activist Jacob Whipple initially scheduled General Service Weekend to take place April 4 and 5 during LDS General Conference. Bad weather, however, forced him to move the date to April 11 and 12 for projects in Salt Lake City. Projects scheduled for Northern Utah will go on as planned.

In the wake of a bizarre email forward alleging that gays and anarchists would crash the conference as well as anger at the LDS Church for its support of a successful attempt to re-ban gay marriage in California, activist Jacob Whipple said he received a number of calls asking if there would be a protest during General Conference.

Whipple said he didn’t want to call for one. Instead, he said he wanted to take advantage of this desire for activism and “organize that into something positive.”

Thus, Whipple’s request that gay and transgender Utahns and their allies dedicate their time to community service.

With a number of projects for volunteers to choose from, Whipple called the first Community Service Weekend “ambitious.” Projects include two in Ogden and a number in Salt Lake City. Ogdenites will be building a ramp for wheelchair users with the Weber Housing Authority and cleaning up parks in Weber.

Salt Lake City Volunteers will be assisting the Road Home (nine homeless halfway houses) and Utah G.A.R.D.E.N.S. with yard work; cleaning up Dimple Dell and Wasatch Park; repainting classrooms with the Utah Head Start Program; and making home visits to new refugee families to ascertain their needs. They can also sort medical supplies to be used in humanitarian efforts.

Salt Lake City clubs are also participating in this call for volunteerism. On April 1, Club Jam held an April Fool’s Fundraiser to benefit local refugee families. On April 3, Club Sound host an opening party complete with free admission for donations of food and clothing (doors open at 10:00 p.m.). On Saturday, the Depot will hold a silent auction to benefit refugee families.

Whipple said that he and other activists would “be looking closely” at how General Service Weekend works to determine “how often we can perform this service for the community.” Ultimately, he said he would love to hold such a weekend during LDS Conferences in the spring and fall.

“I could see it becoming a quarterly event,” he added.

However, Whipple stressed that the service weekend was not started to compete with LDS General Conference. 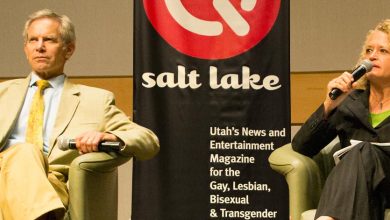