And while it may not look it as these revelers pass by in an orderly fashion with their signs, strollers and rainbow balloons, parades just don’t organize themselves. Logan Brueck can attest to that. For the past three years, he’s made sure the annual celebration of gay and transgender Utahns has gone off without a hitch or a busted high heel.

“We’re shooting to get this one to be the biggest one yet,” said Brueck, noting that last year’s parade entries caped out at almost 100, a number he hopes to exceed in the last few days before parade registration closes.

As the co-founder and leader of Utah’s gay-friendly color guard, the Righteously Outrageous Twirling Corps – Salt Lake City, Brueck is a natural and obvious choice for parade organizer, which they asked him to become in 2007.

“With my background in parades and marching and stuff like that [Pride Festival 2007 Director Terry Mitchell Nani] asked if I’d be interested in doing it, and I went ahead and accepted the offer,” said Brueck. Before the day of the parade, Brueck contacts local gay and gay-friendly groups, clubs and organizations to gage their interest in participating, and to help brainstorm with people who want to participate, but don’t know what to do for an entry.

“People think they have to have a big float, but that’s not true,” said Brueck. “Just get a group of guys together, get a banner, and carry pots and wooden spoons and bang on them.” On the day of the parade, he said he takes the list of entrants from the Utah Pride Center and lines up the entries as they arrive.

While the job may sound simple, it’s far from that when you consider what it must be like to wrangle hundreds of marchers and large floats.

“I have an assistant now,” laughed Brueck.

It’s also a long way to have come in the eight years Brueck has called Utah home. Before he led ROTC SLC to victories in the Las Vegas Pride Parade for three years running, Brueck lived in Charlotte, North Carolina. He moved to Utah in December of 2001 — shortly after his then-partner’s death. As Brueck explains it, he was looking for a change of scene, and he found it when he came to Utah to spend time on a friend’s houseboat.

“I was coming out for a gay cruise on Lake Powell and fell in love with the area,” he said. “It’s the only place I’ve ever been able to see the Milky Way and shooting stars.” Upon returning to the South, Brueck packed his possessions in six boxes and bought a one-way ticket on US Air.

As Brueck explains it, he had always had an interest in color guard. He started out just “playing around” with the color guard’s rifles when he was a member of his high school’s marching band and eventually joined his school’s squad as a junior in 1978. He later became the squad’s captain and went on to train color guards at different high schools after graduation. During his ten years as a staff sergeant in the U.S. Air Force, Brueck also served in the Air Force’s color guard.

“I just had a natural aptitude for it,” said Brueck. “It’s one of the few things I never stopped doing.”

After his move to Utah, Brueck decided he’d like to share his love for flags, riffles and marching with other interested people. After reading an article about ROTC-Chicago’s performance during the opening ceremonies at the Gay Olympics, Logan and his friend Kaye Christensen decided to start a similar group in Utah to open this state’s annual Pride Parade.

Since then, the group has twirled, spun flags and danced for a number of Utah events, including Salt Lake City’s Farmer’s Market and the People With AIDS Coalition’s annual barbecue. They have also performed with other gay-friendly color guards and even competed in Las Vegas’ annual Pride Parade, where they have always walked away with an award — Second Place Marching Unit in 2007, Best Overall Marching Unit in 2008 and Best Use of Lights this year.

Along with ROTC-SLC, Brueck is also the co-founder of the Spicy Dinner Group, a monthly social dining group for gay and bisexual men, which he ran for five years. In the past year, he has turned over the reigns to Kelly Albright so he can focus more of his time on the color guard — for which he has some very big plans.

“We are looking at going back to Florida in the first week of December for the Christmas Parade on the fifth,” said Brueck, adding that the group is also discussing doing a fundraiser for Southern Utah Pride, Inc. to help the organization build a community center for gay, lesbian, bisexual and transgender people in Southern Utah.

In his spare time, Brueck enjoys spending time with friends, cooking and being at home with his partner Don Demke “giving him the time he deserves to have.” He also enjoys his two cats and two dogs (all four are rescues), and donating his time to the Utah Animal Advocacy Foundation. Brueck has even held dinners for UAAF’s volunteers in his back yard. The group specializes in rescuing, rehabilitating and placing pets, including those that are disabled, aged or that have other “special needs.”

“We really are close with them, the outreach and the work they do with the animals [is great],” he said.

So will all of the time and energy Brueck has donated to this year’s Pride Parade result in the creation of the largest parade in the event’s history?

“Well, it doesn’t look promising for 100, but there’s so many people who wait until the last minute [to sign up] …” he said.

Then again, few people thought that little Salt Lake City would take home the top award in such a huge Pride Parade as Las Vegas’. Which just goes to show that, under Brueck’s leadership, anything is possible.

Gay gardeners give to homeless youth 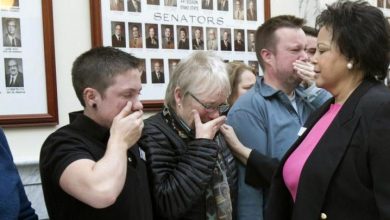