Rep. Jason Chaffetz (R-Utah) and Rep. Jim Jordan (R-Ohio) have joined to submit two amendments to the annual District of Columbia appropriations bill aimed at nullifying D.C.’s out of state marriage law recognition unless district voters approve it in the next general election and stripping funding for its implementation. 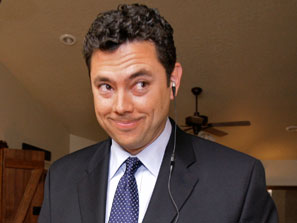 According to Chaffetz’ communications director Alisia Essig, Amendment 16 would “provide that any law enacted by the D.C. Council that recognizes any definition of marriage other than a union between one man and one woman shall be invalid unless approved by the electors of the District of Columbia in the first general election that follows the enactment of that law. This provision would apply to any law enacted by the Council at any time before, on, or after the enactment of this Act.”

Insiders say that neither amendment has much traction in the Democratic-controlled House Rules Committee.

Also, Rep. Steve King (R-Iowa) filed Amendment No. 77, which would prohibit the use of funds for D.C.’s domestic partnership law, which stems from the Health Care Benefits Expansion Act of 1992.

“None of the funds made available in this act may be used to implement or enforce the Health Care Benefits Expansion Act of 1992,” says the proposed amendment.

And Rep. Dan Burton (D-Ind.) filed Amendment No. 28, which would block the use of funds for any court that would hear the question of the constitutional validity of the amendments made by the Defense of Marriage Act.

“None of the funds made available in this act may be used for any court created by act of Congress or the Supreme Court, to hear or decide a question of the constitutional validity of the amendments made by the Defense of Marriage Act providing that no state shall be required to give effect to any marriage between persons of the same sex under the laws of any state,” says the proposed amendment.

An unnamed staffer with Rep. Jared Polis (D-Co) has told callers that “there is very little chance that any of the proposed amendments would it make through the Democratic-controlled Rules Committee to reach the House floor,” but hoped their efforts continue, as “stuff like this seems to occupy these clowns and it keeps them out of the our hair while we work on important things … like the health care reform bill.”