Jacin’s tongue had loosened up after three mojitos, and what had started out as an intimate party for Jody’s 35th birthday now had turned into a roast.

“And yes, she’s been married a few times,” Jacin continued. “To several girls … and a few boys. But I’m honestly happy that she has met Kat, someone to look after her when she forgets to take a shower, or leaves the toilet seat up … no, no just kidding.”

Kat, who was sitting beside Jody, only chuckled while Jody was in hysterics.

Kat had driven down from Pocatello, Idaho just for this party, and well, because she couldn’t stand to be away from Jody for more than a blink of an eye.

The two had met three weekends ago at Charleys, Pocatello’s one-and-only gay bar. That weekend Jody, Eddie and Josh got a wild hair up their butts to go party in Kat’s little town. Unfortunately, the first night at the bar, Kat and Jody had played staring games with each other much too long and by the time they finally spoke words to each other, which were, “You’re new” and “Yeah … hold on I gotta pee,” the blood in their veins was as thin as Lara Flynn Boyle.

Sufficed to say, they spent the night together; though Jody had kept insisting “no sex” the entire cab ride to Kat’s apartment, but she then immediately tore Kat’s clothes off as soon as the screen door buoyed shut behind them.

The following morning Kat drove Jody back to the hotel to meet Eddie and Josh – plans were made to tube the river in Lava Hot Springs. Jody informed Kat that she’d probably get the third degree from the boys.

“They’re very protective of me,” she warned before sliding the keycard in the lock. “Which I think is pretty fabulous,” she added.

Horrified, Kat said as if her ears were burning, “Fabulous?”

“Well I sort of figured since you wear makeup and carry a purse and wear bedazzled sandals.”

They entered the room. Josh and Eddie were in bed together, their bodies snaked around each other – a perk they agreed to anytime they vacationed together.

George stood up from the table and directed at Jacin, “Okay honey, sit down. Let me give the next toast to the birthday girl.”

“I haven’t known Jody as long as Jacin,” he started. “But what I do know about her, because of having her over for dinner as often as we do, is that it’s no wonder she’s as short and thin as she is since she doesn’t like any foods that are green, red, black, yellow or white … and, well, any fish.”

George looked at the spread on the table, “That is why we’re having plain pork chops with a side of wheat toast for dinner and blue Otter Pops for dessert. Bon appétit!”

“Wait, wait!” Eddie insisted, placing his napkin on the table when he stood. “My turn. I’ll start off by saying something nice about Jody, unlike the rest of you mean old trolls.”

Eddie cleared his throat, “I’m really, truly happy for Jody … to see that her hair has finally grown back after letting me cut out the roller bush that was tangled in it.”

Eddie raised his mojito to Jody and said, “Stop thinking so hard Jody, your tongue’s hanging out.”

“No, no Nanette,” Kat interrupted Jody. “My turn to get in on this action.”

“So, Eddie and Josh,” she began. “You remember the night Jody and I met and she went home with me, right?

“Well there’s something I left out,” Kat put her hand on Jody’s shoulder, while Jody bowed her head in shame. “We didn’t even get a chance to turn on the lights when we got inside, she was all over me … to quote George, ‘like a badger in heat.’” So we were climbing all over each other on my bed and all of sudden Jody just sort of flung off the bed. She was on top of me one second, on the floor the next.

So I turned on the bedside lamp, and there she was, on her back giggling, her stomach beating like a heart, and there were these two Sneetches facing each other and dancing on her stomach. It took me a second but then realized they were tattoos. And then I saw that her bellybutton was pierced with a starred stud – it was right then that I knew I was in love.”

“But wait, there’s more,” Kat said. “The first time I came to Salt Lake to see Jody, she showed me the room that she had turned into a Dr. Seuss shrine. There are Horten slippers laid out on the floor, a huge cardboard cutout of Cat in the Hat, a Star-Belly Sneetches wall clock, posters of biffer-baums and flummox, rows of Dr. Seuss books and dozens of porcelain figurines like Cat in the Hat carrying a tray of green eggs and ham, and goldfish and several Cindy Lou Whos, and there’s even a remote-control car driven by the Grinch … it’s kind of creepy.”

Stunned, Jody stood up, her head tilted back some so she could look kat in the eyes. “Really?” she asked peevishly, as the red Thing One and Thing Two T-shirt she was wearing screamed at the entire dinner table. 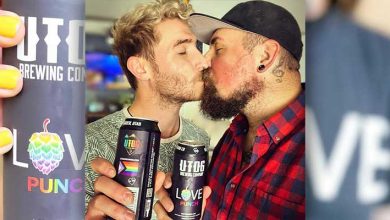 Couple of Guys – Table The Discussion