Someone once asked my dad if he ever regretted having six kids. I’m not sure what the guy expected him to say. Maybe he figured being a father is like getting a new car: You can have buyer’s remorse.

But I can see where this man was coming from. He and his wife didn’t have children, and they led a very different life than my parents. My parents didn’t visit exclusive spas, dine at four-star restaurants, or have a home filled with fragile, irreplaceable antiques. No, my mom and dad ate at Bob’s Big Boy and had a home filled with half a dozen loud, rowdy kids!

So I guess I shouldn’t be surprised when people ask me if I regret becoming a father. What I do find surprising is that the question mostly comes from straight people.

And I think I’ve finally figured out why. To quote a former colleague of mine, “Now you’ve got kids, you’re barely even gay anymore.”

This revelation came during a staff meeting where several people were talking about a particularly notorious local gay bar. I had no idea it even existed.

David was right; I am barely gay anymore.

Before Gus and Niko came along, I was a perfectly respectable homosexual. My buddies and I would regularly go bar hopping. Kelly and I marched in several Pride parades. There’s even photographic evidence of me protesting against DOMA!

Then I became a dad.

Suddenly, I am scheduling play dates, taking kids to the pediatrician and driving something frighteningly similar to a minivan. (It’s a crossover, NOT a minivan, dammit!) All because my kids need these things.

We missed Pride this year. Instead we stayed home, battling the boys’ colds. So even though a little rain fell on the merrymaking, I still think it was far less liquid than what poured out of their noses.

We never accept the standing invitation from my friend Tom and his partner Colby to join them and a house filled with mostly gay men for their regular Saturday night cocktail social. The boys would be bored.

Then there’s the damage the boys have done to my sex life. How many gay men do you know who have to plan ahead to get laid by their own partner? The very guy sleeping on the other side of the bed! Inevitably, there’s a little body between us, or someone bounds into our bedroom, asking about breakfast.

Seriously, if we as a community ever want to change the opinion of religious whackos that all gay men are a bunch of oversexed perverts, I suggest they make a fieldtrip to my bedroom. A couple of wannabe oversexed perverts, maybe, but after more than 20 years together and two kids, what they’d find is the two of us snoring away next to each other.

But the fact that there’s someone to snore next to makes all the difference in the world. We’re a team. One of us can get the boys ready for bed while the other finishes the mountains of laundry — one of the things no one tells you about having kids is that there is a never ending stream of laundry.

I cannot imagine what it must be like for single parents like my friend, Brett, who’s raising his 12-year-old niece. When I asked him what was the most difficult part about being a single gay parent he immediately reminded me he hasn’t had a date in two years. By the time he’s finished with everything that needs to be done, he says he’s just too tired to put himself out there on the market.

What I’ve discovered from all this complaining is that my siblings’ taunts are true: I am becoming my dad. A taller, gay version of him, anyway. I’m sure he didn’t want to see The Apple Dumpling Gang with me any more than I wanted to see G-Force with my boys. But we both went. (Actually, since The Apple Dumpling Gang is sort of a Western, he probably did want to see it.)

But I’m certain that the births of his six children changed his view of himself and dramatically altered his priorities. Just as the adoption of my two kids has changed my self-perception and altered my priorities.

What I need to keep reminding myself is that reading Thomas the Tank Engine books, watching Kung Fu Panda, and playing with Hot Wheels will never change the fact that I am a gay man. Nothing I do for my kids ever will.

By the way, my dad didn’t hesitate when answering the question about whether he regrets having all us kids. He simply replied that he wouldn’t trade even one of his children for anything in the world. Neither would I. Like father, like son I suppose.

My dinner with Dallin

Happy birthday to me 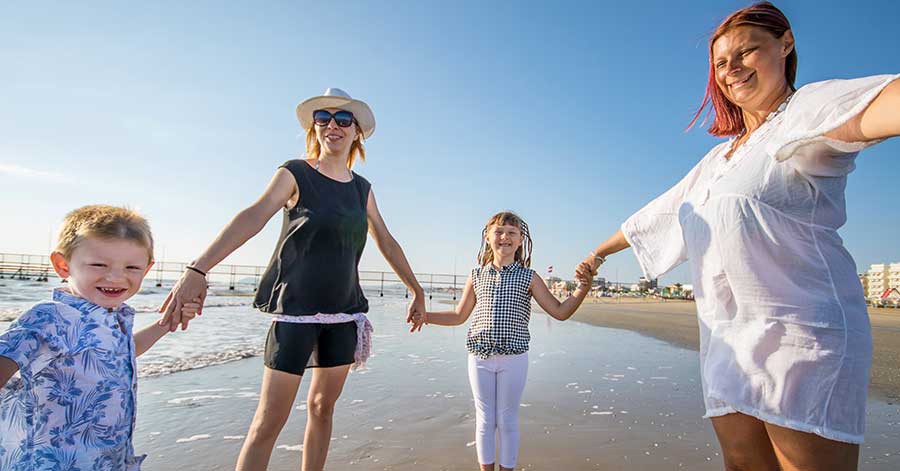