Listen to this article
During his keynote speech at this year’s Utah Pride Festival, Harvey Milk protégé Cleve Jones’s called for a march on Washington, D.C. to demand that Congress pass a gay and transgender-inclusive federal hate crimes bill and end such anti-gay and anti-transgender policies as the Defense of Marriage Act and Don’t Ask, Don’t Tell, the military’s infamous ban on openly gay, lesbian, bisexual and transgender servicemembers.

Just hours after his speech, headlines announced the march to the world. Some activists cheered while others criticized Jones and other organizers for scheduling the march for Oct. 11, when Congress was not in session. National lobby groups like the Human Rights Campaign and the LGBT Task Force responded with caution and neutrality and only recently changed their stance to one of support.

Meanwhile, gay, lesbian, bisexual and transgender Utahns, who once again found themselves at the epicenter of a movement revitalized by the passage of California’s Proposition 8, ordered their plane and bus tickets, organized carpools and made reservations for lodging or couch surfing.

As one might expect several of the Utah Pride Center’s current and former employees plan to go, including Youth Programs Director Jude McNeil and former Youth Programs Coordinator Bonnie Owens. Executive Director Valerie Larabee said she will also go with a group of friends.

“I’m one of those people who has never had a chance to participate in the National March on Washington, so this is totally I have to get this in,” she said, referring to the march held in 1979 shortly after Milk’s assassination which 2009’s march honors.

“This one is particularly important because we’ve been in the eye of the storm here in Utah,” she continued. “Cleve announced the march here and he’s coming back [to speak] for National Coming Out Day. We’ve really developed a sense of pride around the entire event.”

That pride is also shared by Debbie Thompson, who will attend the march with her wife, Reanna.

“The second that I heard at our Pride [Festival] that we were calling for a march on Washington, I instantly knew we had to be there,” she said. “It feels to me like kind of a historic opportunity to be very visible with my discomfort and unease at being treated like a second class citizen.”

Marching, she added, is just the next logical step in the way she and Reanna choose to live their lives.

“We make an effort to not hide who we are,” she explained. “We do that at work and in our neighborhoods and we do that in our church because we think that showing the everyday neighbor kind of people that we are will spread the idea that GLB people are not weird or perverts or anything. We’re just like everyone else and therefore deserving of the same rights.”

“I just felt compelled to be part of that and hopefully be part of history,” said Law, who attended a similar march on the nation’s capitol in 2000.

Since Proposition 8’s controversial passage into law and the protests it touched off throughout Utah and the nation, Law, who has always been active in social justice causes, said she has found herself becoming politically active and passionate about “LGBTQ issues and policy.”

“I support change in a lot of national policies, especially the push for same-sex marriage, and I feel like we’ve been complacent a long time as a community,” she said. “I think we’re finally pulling together with the help of the passing of Prop. 8. It’s given us the push we need as a community to come together and say enough is enough and we want our rights now. I feel like I need to do my part, I can’t just expect everyone else to fight for my rights.”

Ultimately, the women all said that the numbers the march draws aren’t nearly as important as the sense of community it encourages.

“I don’t care if 100 people or 100,000 show up; they’re all going because they believe in equality and that’s what makes it special for me,” said Larabee.

Thompson agreed. “I think that even if congress was in session they’d be hidden from us and we wouldn’t be allowed to get close enough to make a difference,” she said. “But it’s not the impact that you have directly on people that are right in front of you. It’s the effort and the will power of our movement to gather together in a place far away. We’re showing how serious we are, how powerful we are, and the lengths we’re willing to go to say enough of this.”

“I think it’s going to be phenomenal,” she continued. “It’s the point that, in this economy, we have so many people going out of their way and making their way in car pools and even hitchhiking. It’s a very determined group of people.”

If you want to go to the march, but have not yet made plans, it isn’t too late. To find others going to the march and to discuss transportation and lodging specifics, join the Facebook group named “Utah Delegation.” 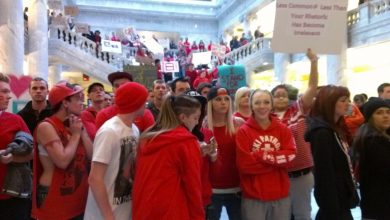