Christian Burch’s debut book The Manny Files and its sequel Hit the Road, Manny are recommended for children ages 8-12. However, both are rather entertaining for adults as well — even those who don’t have children to read them to. You may be thinking, ‘oh, like the Harry Potter books.’ Not exactly. These are not fantasy books about magic and mayhem, but about the difficulties — and joys — of our contemporary life, humorously visualized through the eyes of an 8-year-old boy, with the guidance of his gay male nanny.


The author, Burch, says of them, “The books are a mixture of actual events and fiction. The four kid character’s personalities are based on the six kids I’ve been a manny for, for the past 12 years. Some of the events did happen (my mother used to chase us around the house and threaten to put us in the attic; it would be a whole lot of fun but one of us would eventually hit our melt-down limit and the fun would turn to terror). Some events are completely fiction (there is no real life Uncle Max).”

In The Manny Files, 8-year-old Keats Dalinger is sort of an outsider who feels like he’s living in the shadows of his older sisters Lulu and India. When his parents hire a male nanny, who nudges Keats to “be interesting,” he begins a journey of self discovery and courage. But Lulu, a stubborn pre-teen, is disgusted with their male nanny and his buffoonery, and starts to keep a list of all the reasons why he should be fired, in what she calls ‘The Manny Files.’

It’s not indicated, or even hinted to, that the manny happens to be gay until about two-thirds through the book. “In life, you meet people and grow to love them or to respect them, and then you might find out something about them, such as they are gay,” explains Burch. “They are the same person they have always been, there is just something new that you know about them. I wanted readers to love the manny and his antics, and then realize that just because he is gay, it doesn’t change the adventures and fun that he brought to them.”

Yet, Keats’ demeanor, mannerisms and thoughts throughout the book hint ( or for some, reflect themselves) to being gay. -I had the same feeling of excitement in my stomach that I get when the Sound of Music comes on television. Like I have to pee and throw up at the same time.

In Hit the Road, Manny, the bulk of the story takes place “on the road” during the annual Dalinger family summer vacation. While driving across the country in an RV, the Dalingers and the manny go through a number of tribulations stemmed from being in confined quarters for much too long.
Unfortunately the one downside to Hit the Road, Manny is that it moves a bit too briskly, especially when they visit the manny’s parents’; the result of that visit feels unlikely in its hastiness.

As in the first book, Keats’ unique observations and childhood truthfulness make it worth flipping the pages. -The manny lifted his head up too. He looked like a cross between Mr. Clean and Vin Diesel without all the muscles. -I yelled, “He’s GAY! There’s nothing wrong with it. He can get hair plugs if he wants!” -I’ve never seen a water polo team in a parade before, especially in their swimsuits. India said that it was a “flock of Glamour Don’ts.”

The Dalinger family dynamic is what drives these books: From small, seemingly unimportant events throughout: Keats’ birthday, family vacations and school bullying to larger lessons like experiencing the miracle of birth, understanding love, coping through death and finding courage, the Dalingers, with the help of their jokster manny, forge through growing up and life itself with a lot of humor, honesty and tenderness.
Both books were nominated for Lambda Literary Awards, and The Manny Files won the Josette Frank Award. But Burch says the real pride in his work comes from the readers. “I did a reading to fifth graders at Bank Street School who were in the middle of reading the book,” remembers Burch. “One boy asked if the manny was gay. When I said yes, he pumped his fist into the air and yelled, ‘Yes! I knew it.’ Another mother sent me a letter that thanked me for the books because it opened up a conversation with her little boy who marches to the beat of his own “Jazz” drummer.

Christian Burch is no longer a nanny; he is teaching arts and creative writing at the Jackson Hole Community School, a college prep school. He’s a non-Mormon BYU alumnus, and doesn’t think they [BYU] carry his books in the bookstore.

Plan B’s ‘Gutenberg! The Musical’ is a Romp 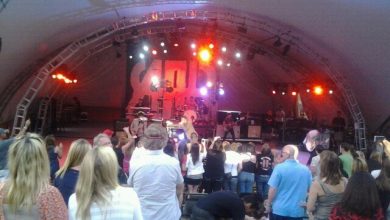 The Bookworm Sez: “Dangerous When Wet”