The first person up to speak at a work session of the Salt Lake City Council concerning two proposed ordinances that would protect gay and transgender people from discrimination in housing and employment within city limits was a representative of the Church of Jesus Christ of Latter-day Saints.

He spoke of the church’s support for the measure.

It is rare that the LDS Church makes a public statement on any legislation, though it is not uncommon for behind-the-scenes work to make or break a bill or ordinance.

“The non-discrimination ordinance being reviewed by the City Council concerns important questions for the thoughtful people of this community,” Michael Otterson, managing director of Public Affairs for the church said after making it clear that this was an official statement from church leaders. 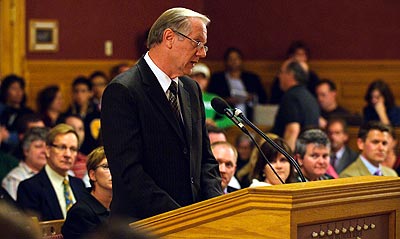 “Like most of America, our community in Salt Lake City is comprised of citizens of different faiths and values, different races and cultures, different political views and divergent demographics. Across America and around the world, diverse communities such as ours are wrestling with complex social and moral questions. People often feel strongly about such issues. Sometimes they feel so strongly that the ways in which they relate to one another seem to strain the fabric of our society, especially where the interests of one group seem to collide with the interests of another,” he continued.

“The issue before you tonight is the right of people to have a roof over their heads and the right to work without being discriminated against. But, importantly, the ordinance also attempts to balance vital issues of religious freedom. In essence, the church agrees with the approach which Mayor Becker is taking on this matter.”

“The church supports this ordinance because it is fair and reasonable and does not do violence to the institution of marriage,” he said. “It is also entirely consistent with the church’s prior position on these matters. The church remains unequivocally committed to defending the bedrock foundation of marriage between a man and a woman.”

Dozens of people spoke before the council, many of whom related personal stories of discrimination they had faced within city borders. Others spoke of their appreciation to church leaders for speaking out on the issue. 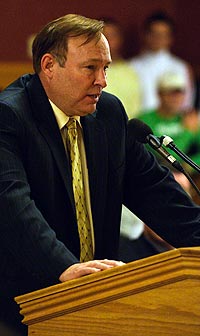 “This is a great opportunity the city has to bring together divergent ideas and populations,” said Jim Dabakis. “It is wonderful that people who have strong differences can learn to respect one another and even show love to one another.”

“This is a historic night,” he concluded.

Former councilmember Deeda Seed, who fought and failed for such an ordinance through much of her council term, explained to the council how historic it was.

“This is kind of a momentous occassion. Twelve years ago this very day, the council, with very different folks than you, had a very different discussion on this issue,” she said. “I think it’s very appropriate that on this day we revisit this measure.”

“I am absolutely delighted to be standing in solidarity with the LDS Church is support of this important ordinance,” Seed continued. “This is a time for love and kindness and gentleness to prevail so that we can be the best that we can be. Our city will set a shining example to the rest of the state and the rest of the nation.”

The church statement comes after two months of behind-the-scenes meetings between gay activists and church leaders, spawned after three “kiss-ins” on the Main Street Plaza after church security ousted two men for holding hands and kissing.

Seed organized the first well-attended event and approached council chair Carlton Christianson suggesting a dialog between the church and the gay community. Christianson reportedly suggested the idea to church leaders, who agreed to start a dialog in secret.

Meetings were held in a neutral location: the home of Sam and Diane Stewart who are friends of Dabakis and active members of the church. 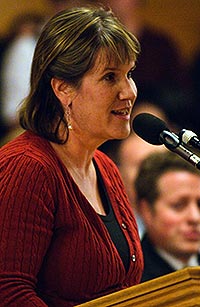 After a rocky start, the meetings began to build good will between the disparate parties, though it was clear to both sides that differences were unlikely to be fully reconciled. The church would not budge on fighting against gay marriage and gay leaders would not budge on fighting for them.
Six weeks into the meetings, they were canceled. But then a week ago Dabakis received a call asking him to reconvene the “gang of five” for some face time with church leaders. They met almost daily leading up to the Tuesday, Nov. 10 announcement.

Dabakis said the meetings showed the caring and loving of church leaders and in his comments before the council said he hoped “this is the beginning of an ongoing dialog.”

All but one Salt Lake City resident spoke in favor of the ordinances.

Representatives of America Forever were onhand to blast the proposed ordinance as being about sexual behavior  and about city and church leaders becoming victims of the Human Rights Campaign. 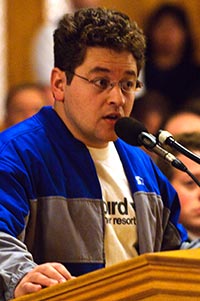 “We are talking about sexual conduct here,” said America Forever’s Jonas M. R. Filho of Midvale, Utah. “You cannot remove the act from the word. Gay, lesbian, transgender are all definitions the gay community has come up with to force people to accept their behavior. We should have the right to not associate with these people.”

Jill Remington Love moved for the work meeting to be closed and the council go into session in order to make the motion to pass the ordinances that night rather than waiting until the next schedule meeting.

After impassioned and emotional speeches from many of the council members, the motion passed unanimously. 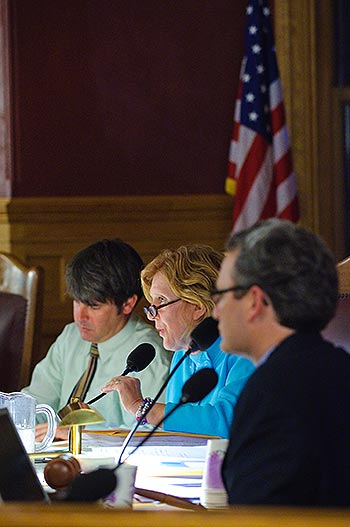 The law will go into effect in April, after the Utah Legislative Session. Many believed the legislature would target the new ordinances, but conventional wisdom says because of church support, that is unlikely.

QSaltLake will have a more indepth review of what the council’s actions mean to gay and lesbian Salt Lakers in the next issue.