In a ceremony at the Salt Lake City Main Library, mayor Ralph Becker signed two ordinances aimed at nondiscrimination in housing and employment within city limits.

Yolanda Francisco-Nez, coordinator of the Office of Diversity & Human Rights, said that “it is under mayor Becker’s leadership and vision that we will achieve equality for all in Salt Lake City.”

The mayor had spelled out a plan to codify nondiscrimination in the city during his campaign two years ago. In his first week in office he created a city-wide registry for unmarried partners which was targeted by the Utah State Legislature and renamed the “Mutual Commitment Registry” to avoid the term “domestic partner.”

“This was number two on the list,” Becker said of the new ordinances. “This effort today really culminates more than two years of a lot of hard work by an enormous amount of people.” 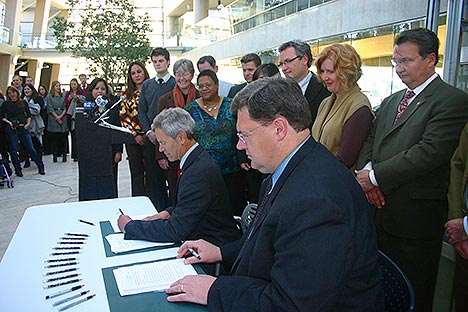 “It took that kind of effort,” he continued, “of a lot of people willing to come together put aside our natural differences to realize that at the heart of our success as a community is all of us living together and respecting each other.”

In the past two years, the Human Rights Commission sponsored five public discussions in various parts of the city, ending in a discrimination report released in June.

The ordinances add sexual orientation and gender identity to classes already protected under law in employment and housing.

Carved out of the employment law are religious organizations, the Boy Scouts of America, the Federal Government and employers of fewer than 15 people. The housing ordinance exempts residences operated by non-profit, charitable or religious organizations, dormitories or the Federal Government. Persons or organizations not owning at least four properties in the city or do not use a rental or real estate service, and owner-occupied buildings with four or less units are also exempt from the new law.

Offenses against the ordinances are punishable by a $500 to $1000 fine.

Prides across the state