Our illustrious editor at QSaltLake Michael Aaron and I were treated a few weeks ago to the most delightful evening at Sapa Restaurant. (We both agreed that the company was superb.)

Sapa is actually a city in Vietnam, and in a newly-built courtyard adjacent to the dining rooms at the restaurant, the owners have assembled, stick by stick, an elaborately carved temple from Sapa. It’s, in a word, awesome.

The restaurant is a combination of traditional Asian cuisine but is heavily influenced by Vietnamese and Thai dishes. It also has an extensive and very busy sushi bar. As you enter from State Street you’re immediately transported into an Asian dream world — the restaurant’s décor, the hand blown glass chandeliers, and the contemporary architecture blended with Asian antiques is the perfect setting to frame the food served there. Michael and I were blown away and we both commented how Sapa’s cinemascope ambiance is reminiscent of La Caille’s decor in the way that it completely grabs your senses.

We were greeted by Mai who is one of the owners and who, over the past eight years, has made Sapa her dream come true. She is beautiful, engaging and knowledgeable, and we were honored to have her as our host.

As I usually do when dining out, I asked Mai to bring us what she thought was her best dish. She had us start with sushi and sashimi; I was game and actually enjoy nicely-made sushi, but Michael made a face and did the typical Utah thing. “Ooo, raw fish? I can’t do that,” he protested. But me, being who I am said, “Hey Dude, you wanted to come here and have the total experience. You need to man up and at least try this stuff.”

He relented and said, “You’re right. I need to man up!”

But when our first plate arrived — and it was gorgeous! — we both had to man up! We got a plate of all raw fish and, even though I’ve had shashimi in the past, a whole plate of this was a bit daunting. On a bed of rice stick noodles, with a ramekin of soy and cut cucumber and lemon, we had raw halibut, red snapper, tuna and red trout which had been rolled up into little rose buds. The white fish were topped with red and black caviar accompanied by tradition sushi condiments. It was all so tender, delicate and sweet that I must say it was first time that the fact I was eating raw fish was completely removed from my culinary thought pattern; the dubious Michael and I were both happily gobbling it down.

I had brought a Hannah Sauvignon Blanc which I had been meaning to try and knew it would go well with seafood, but I ended up being a little disappointed; I thought the wine would have more complexity and more citrus to it. But a friend at an adjoining table sent Michael a glass of Two Dog white — a California blend with a Utah connection — and we both were impressed with that wine.
Mai next brought us two very long platters of sushi rolls: the Imperial and the Blazing Jazz. They were also impeccably plated and drizzled and it looked like a ton of food, but we busily go to it and ate every bite. For two Utah Anglos, we were really enjoying this experience!

We were wowed again when we tried two kinds of lamb: rack lollipops served with dots of a wasabi dressing and a meticulous stir-fry of lamb strips in Panang curry served in a golden pool of buttermilk/squash puree. Heaven! We also enjoyed a beef tenderloin stir-fry complimented by green apple juliennes and other veggies. Everything was exciting, nicely seasoned and plated by true artists. The next day Michael wrote on his Face Book page, “You have to go to Sapa!”

Sapa has an expertly assembled wine list and cocktail menu. Also, its waiters and waitresses were dressed more like top notch Bistro staffers and were diverse and out of the norm for an Asian-style restaurant. Sapa has very successfully blended authentic Asian Cuisine with American tastes is such a way that you become caught up in Mai’s dream, and all of a sudden you’re gulping raw fish and loving it!

Sapa is open for lunch and dinner. The sushi and sashimi dishes were around $14 and the lamb and beef entrees ranged from $12 to $17. The restaurant with the reconstructed temple is located between 7th and 8th South on State Street.  I give it a rating of 95. 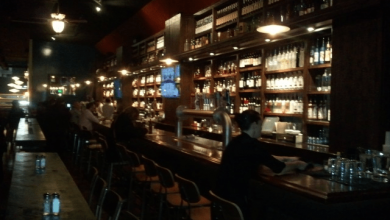