Eddie Sarfaty is a talented comedian and writer who has appeared on Comedy Central, NBC’s Today Show and on gay, lesbian, bisexual and transgender programming network Logo’s stand-up comedy show, Wisecrack. He is a member of the groundbreaking comedy troupe Funny Gay Males and performs regularly across the country — most notably in Provincetown, Mass. each summer and on a number of cruise ships. He is also the author of Mental: Funny in the Head, a book of humorous essays released in July 2009 from Kensington Press. On Jan. 22, he will perform at Club Jam in a benefit performance for the QCares Foundation, QSaltLake’s community outreach program.

On Jan. 5, Sarfaty and I spoke about his career, his charitable work for gay, lesbian, bisexual and transgender people, and what makes his comedy tick. 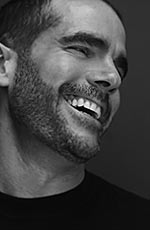 JoSelle Vanderhooft: How did your performance at Club Jam fall into place?

Eddie Sarfaty: A fan of mine from SLC hit me up on Facebook and said come to Salt Lake.

JV: And that was that?

ES: He put me in touch with the guys at Jam and I sent them a link to my comedy demo and sent them a copy of my book and we worked out an event.

JV: I’m always curious when I interview people in the entertainment field about how they got into their particular lines of work. How did you get into stand up comedy?

ES: When I was a kid I was kind of, you know, I was kind of a fat kid. I didn’t have so many friends. My parents sent me to a summer camp for the performing arts, and I loved it and had great experiences there with choir and acting, and I always thought I wanted to be an actor. When I got older I did things in high school and community theatre, and I was a drama major in college. And then I somehow decided I really loved the whole atmosphere of being in a show, but I didn’t really love the nuts and bolts of the acting. It’s very intense, very specific work and I could be good at it when I put my mind to it, but I didn’t love it as much as I think you’re supposed to love it if you’re going to do it for a living. It’s much more fun for me to be on stage and say what I want to say the way I want to say it rather trying to synthesize the author’s intent and how the character walks and what the director’s vision is and all of that.

I was studying at the National Theatre Institute at the time, and I was telling a joke to some people. It was one of those things where people came over and said, “Oh, tell him the joke! Tell him the joke!”  People were laughing and this girl in my class said, ‘That is so funny. You should be a stand up comic.’ A few days later I was in a Shakespeare class completely butchering some soliloquy. The instructor was giving me all these notes and I didn’t know what she was talking about, so I just started goofing around and someone else said, ‘She’s right, you should be a stand up comic!’ That’s how it first got in my head. But it was years before I ever got the nerve to try it. And then I went into it very slowly. I would do it here and there or do it for awhile then stop. I just sort of took my time doing it and after a bunch of years of saying I was doing it but not really doing it full out, I decided that I didn’t want to be 75 and look back and regret that I didn’t try it. So I quit my other job and just sort of made it work.

JV: I watched some of your routines on your Web site, and one of the things that really struck me about what I and other people who have seen your work observed is that your humor is really surprising and at the same time really warm. You don’t rear people down.

ES: Thank you, because I don’t understand why comics pick on people. I mean, people are nice enough to take the time and spend their money to come and see you perform, I think you really have no business picking on them. And then if you pick on them, they’ll pick on you, and who needs that? I’m not in it for that.

JV: Even when you’re talking, like, about calling your grandmother up and having her ask, “Do you want to hear who died today?” before she says anything else — I mean, there was just something about that sketch that made the moment funny but helped you to understand who she was, and that you loved her I thought that was kind of rare to see.

ES: Thank you. I think stand up isn’t just about the words and the joke and the cleverness; you really want to make some kind of emotional connection with the people [in the audience]. The people who are truly, you know, groundbreaking or great comics connect with the audience. There’s some kid of, you know, camaraderie that builds up, I guess.

JV: Another thing I love about your humor is its subtlety. I’m thinking of one instance where I had to do a double take to get one of your jokes. I don’t want to spoil anything from your set, but I’m thinking in particular of the moment when you said that your father and your boyfriend had the same name: Daddy

ES: Oh, everyone loves that joke.

JV: It took me a second to go, “Oh wait, I got it!” [laughs] That was awesome. I think that’s really special about your work.

ES: A lot of people have one joke in particular that people remember. And that’s a great complement when someone remembers your joke, because if you think about it, when someone tells you a joke, how often do you remember it? Nine times out of ten when people come up to me and say, ‘You had such a great joke,’ [they always mean] that joke. I did it for a TV spot and I thought, oh, if I do it on TV everyone will see it, and if I do it live it won’t be funny anymore. And then they put that joke on the commercial for the series [Logo’s _Wisecrack_]! So I stopped doing it for awhile and people would come up to me and say, ‘You didn’t do the joke! I brought my friend and you didn’t do the daddy joke!’ So it’s never like the whole audience heard it.

JV: With touring and your book, you’re pretty busy now, I’m sure. But are there any other projects you’re working on at the moment?

ES: I’m currently working on a screenplay with my pal Bob Smith [of Funny Gay Men] about a mother and a daughter, and I feel really good about it. I think I could really see it as something that could have a really wide appeal. I also have an idea for a novel I’ve been working here and there a little bit, although my publishers would like me to write another collection of essays, as _Mental_ has been well received and I think they’re trying to build on that.

JV: Your performance at Club Jam is a joint project of the club and QCares Foundation.  Could you talk a little about your involvement with QCares and the work you have done for other charitable organizations?

ES: I always like to have some of the proceeds from my performances go back to the community. I have this book called Mental, so I’ve been working all over the country [to promote it]. I’ve probably been in 20 cities so far doing a standup performance and trying to have an ideal situation for everyone where we make money for the community, everyone has fun, and we do it at a local LGBT venue, and people get to hear about my book and a charity gets helped out. QCares does a lot of stuff with AIDS and substance abuse prevention, and that’s really important. I’m glad to have that be part of this whole thing.

JV: What inspires you to donate part of your paycheck, basically, to GLBT community groups in particular?

ES: In terms of working for the GLBT community, they’ve been the ones who have supported me. If it wasn’t for them, I wouldn’t be making my living the way I’m making it. I didn’t set off to be the gay comic, and certainly I think my stuff is funny and that the great majority of it is accessible to everyone. But it just sort of happened that way. I mean, gay people are fun! I go and I meet a lot of fun people. It can be very lonely. You go out somewhere and do a show, and it’s not like you’re in the company of The Pajama Game or something where you have the whole chorus and you go out. But to be involved and be supported by the gay community is important. I also think it’s important [to remember] if you’re gay or lesbian in New York there are still a lot of things to do. If you’re just in a small town somewhere, there might just be the one bar. I’m not a role model, but I think it’s important for people to see gay people doing something like that [stand up comedy]. It’s very well-appreciated. So of course when it comes to wanting to help people, why wouldn’t I want to help that community that’s been so underserved, first of all? I’m happy to help people who are living with HIV, and I really like doing stuff that benefits gay and lesbian youth. It’s good to give back.

BookwormSez these reads are great for the under the Xmas tree