When the Sundance Film Festival announced 8: The Mormon Proposition, a documentary about the LDS Church’s role in the passage of California’s controversial Proposition 8, as one of its selections, members of Utah’s gay, lesbian, bisexual and transgender community began making preparations not only to promote and celebrate the film, but to counter any anti-gay protestors who showed up for the screenings. 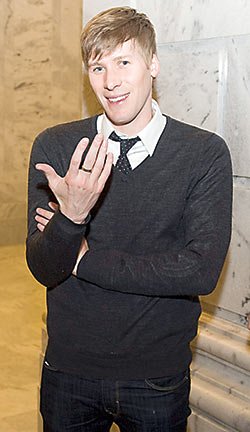 But when none of the usual suspects like Fred Phelps’ Westboro Baptist Church or local anti-gay group America Forever staged any counter protests, local activists like Jacob Whipple and Eric Ethington turned their attention to enjoying the festival and publicizing Reed Cowan’s controversial film, which received a total of six screenings — the last added by popular demand. During Sundance’s duration, they also spoke to reporters, filmmakers and festival-goers alike about their involvement in the film and their views of Proposition 8’s impact on the country’s gay, lesbian, bisexual and transgender community.

“I think many things contributed to the additional screening being added, most importantly the amazing film itself and Reed’s tireless efforts to promote the film,” said Ethington, owner of the blog “Pride in Utah.” “But I do like to think that our rallies had at least something to do with it. This film is such a gift to the national LGBT community and anyone else who cares about their fellow human beings. Its message is one of love and understanding.”

Ethington, Whipple and a number of local activists staged several rallies throughout the festival to draw attention to the film, in which some of the activists actually appeared discussing how they were affected by the church’s support for Proposition 8, which re-banned same-sex marriage in California just six months after the State Supreme Court struck the ban down (the LDS Church considers gay sex to be sinful). They also attended panel discussions held by 8 director, writer and producer Reed Cowan, director Steven Greenstreet, producer Emily Pearson, narrator Dustin Lance Black and local philanthropist Bruce Bastian.

“There were many questions about the movie, and many sincere thanks for bringing this message to light,” Whipple wrote about the opening night question and answer panel discussion in a lengthy Facebook post about his festival experiences. “There was one self-proclaimed Yes On 8 supporter that asked about the ominous sound effects and Big Brother type video that was used when they played audio from the Church’s broadcast to [California]. It was definitely a valid question when looking at it from an LDS perspective, but Reed’s answer was that those effects helped everyone in the audience, from either perspective, to see and feel what we saw and felt when we hear those words from a General Authority.”

Overall, Whipple and Ethington said that response to the film was not only positive, but oftentimes overwhelmingly so.

At the movie’s premiere on Jan. 24, Whipple wrote that the audience “cheered … shouted [and] cried” and booed segments featuring anti-gay Utahns like Gayle Ruzicka and Sen. Chris Buttars, R-West Jordan, (who appears in the film comparing gays to terrorists in a clip from a controversial interview given last February). Ultimately, the crowd of 600 gave the film a standing ovation that lasted throughout the credits.

“I think the audience reaction to the film, while the film was playing, goes a long way to show how great it was and how well it brings people in,” Whipple wrote. “It’s one thing for a movie to bring cheers and open up dialogue when it’s over; it’s something completely different to incite remarks and cheers during the movie.”

“Our publicity guy later told us that in 13 years of working Sundance he had never seen a standing ovation!” he added, noting that the film received a similar ovation during every screening at the festival.

During his stint at Sundance, Whipple said that several people approached him to discuss the film when they saw him wearing a lanyard advertising it.

“Most end[ed] up expressing their own support for our cause,” he said. “Members of the audience and the press alike have come up to me and expressed their gratitude that this story is finally being told. They come to us with tearful eyes telling how their lives have been impacted by intolerance and how they have hope that this film will act as a catalyst to help end discrimination and hate.”

“I’ve seen skeptics go in and after it’s over come back out and ask us for buttons and for interviews,” he continued. I see the message being heard loud and clear and accepted by the hearts and minds that dare to see it.”

Ethington agreed, saying that “the last thing 8:TMP does is attack the church.”

“The movie is really a cause-and-effect piece,” he said. “It highlights honestly what involvement the Mormon leadership had on Proposition 8, then focuses on what happened as a result of those efforts. The horror and violence perpetrated against the LGBT community in the name of Prop 8 has been enormous.”