Last August QSaltLake reported on the introduction of a new class, Queer Filmmaking: A 2009-10 Documenting Communitites Project, formed by Spy Hop Productions — a nonprofit youth media and education center located at 511 W. 200 South. The free class, open to youth, ages 14–19, started in September under the guidance of Frank Feldman, a local documentary filmmaker. “One of the goals of this class is to create [LGBT] activism through media in a positive way,” said Feldman. 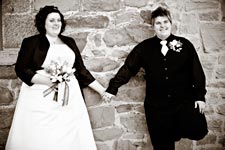 Not only is documentary filmaking designed to be informative, but also “to elevate the day-to-day, the mundane, and to allow for the filmmaker’s opinions,” Feldman said, referencing Michael Moore as an example.

Feldman holds a B.A. in Film Studies from the University of Utah, and has directed and produced several documentary shorts including Protest, SLOC’ed and Natural Family Values. However, in 2008, he stepped outside documentary filmmaking to co-produce, direct and co-write a fictitious comedy short, Vapid Lovelies, which garnered a spot in the 2009 Slamdance Film Festival, as well as, local acclaim.

After a break over the holiday season, the class of eight students (a few of whom are new to the class) reconvened in early February. QSaltLake recently asked a few of these students why the class is important to them, and their answers were encouraging — as to their fair-mindedness and inclusiveness.

Brooke Runyan, a sophomore at Taylorsville High School, said, “It has allowed me to get more involved in the gay community, which is great because I’m straight and the gay community is so nice and welcoming.”

Maddie Pickering, a senior at Highland High School, replied, “I enjoy filmmaking and am a huge supporter of gay rights. This class allows me to do both.”

Shay Hulbert, 17, Highland High School, said, “By doing this class I feel like I’m helping make a difference in the community and opening up awareness.”

Scot Johnson, 17, Granger High School, replied, “Filmmaking is interesting and what the class focuses on is a bonus. I’m interested in supporting many things, but the best part is in the people I know and continue to meet.”

Ethan, a senior at East High School, simply said, “To support my friends.” Short, to the point, yet instills a huge impact.

As with any film, the process in making documentary shorts can be long and at times tedious. Several projects of the class have been brainstormed, and either initiated or put on the back burner, including a short on the impact of LGBT activism in Utah and one tentatively named Gay For A Day, in which heterosexuals would step into the shoes, figuratively, of homosexuals and then describe the experience, as to their own feelings as well as the reaction of others.

Currently however, the students are geared up as they start pre-production of a short film on the LGBT-community reaction to the Moratorium of gay-rights bills in the 2010 Legislative Session, and the respectively offensive comment made by Senate President Michael Waddoups.

Two of the students, Ethan and Shay, had filmed the community “sit-in,” Feb. 12, in the Capitol Building rotunda. They shot 10-second (necessary for a good capture) still shots and panned the crowd holding signs, many with their mouths bound. The footage was then taken back to class where Caitlin, Shay and Sujiet “captured” the footage; meaning they divided it into clips of film that were then uploaded to editing software on the computer.

The class then brainstormed about the “role” the film they captured would eventually take in being “informative.” Caitlin suggested that “if people are feeling silenced, let’s give them a voice,” and the class ran with it. They agreed to put a ‘call out’ to the LGBT community to share their feelings of “being silenced” not only by the Moratorium, but by LGBT discrimination in general. The students diligently went to work on creating flyers to put up in their schools and in community centers, setting up a facebook profile and creating a logo for the film, which they have named Sh(OUT).

Interviews for the film will be held Saturday, March 13, noon to 3 p.m. at Spy Hop. Participants are encouraged to show up during these hours and give a two-minute maximum diatribe of how they have been silenced. After which, the students will edit the interviews into 30-second clips and compile a short video that will be uploaded to YouTube, where interviewees can download them to share with their friends and families.

Spy Hop Productions provides a safe and encouraging environment for the local youth to be expressive through media outlets and music with the help of mentors, like Feldman, who said there’s a lot of trust here [at Spy Hop], and that’s important to these kids. But more importantly, he said, “These students keep amazing me with their ideas and inspiring me with their bravery. I have so much hope for this generation. Young LGBT people are coming out earlier and earlier in their lives, and they are finding acceptance and friendship among their straight peers. It’s so powerful to get to see that for a few hours each week.”