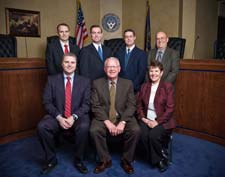 Pyle told the council and the mayor that he had looked over drafts of Salt Lake City’s ordinances (which passed last November) and had turned these over to the city’s attorneys and human resources staff so they could determine if the ordinances would have to be tweaked to better fit West Valley City’s government.

The council then discussed a number of possibilities for implementing nondiscrimination policies. They included passing a nonbinding resolution instead of an ordinance, and making the violation of an ordinance a prosecutable offense rather than a city-mandated fine. The council quickly agreed, however, that Salt Lake City-style ordinances, which imposes a fine on a business and landlords who discriminate against tenants, was the best choice. Other matters the council discussed included the Salt Lake ordinances’ exemptions for small businesses (which employ fewer than 15 people) and landlords with fewer than four units for rent, and exemptions for churches and religious-owned or affiliated organizations.

“It is new territory for us, but the good news is we’ve had a year of good dialogue with Salt Lake City, so the learning curve should be quicker and easier for our staff.”

“It’s unfortunate we have to keep spelling out nondiscrimination issues,” added Councilman Steve Buhler. “I think people just shouldn’t discriminate.”
Councilman Corey Rushton agreed, and told the council about his own experience with religious discrimination while checking into a motel on an out-of-state vacation. When the woman at the desk noticed his Utah driver’s license, Rushton said she asked him if he was “one of those Mormons.”
“As this discussion went on she said we legally can’t discriminate against you for your religious beliefs,” said Rushton, who is LDS. “Never in my wildest dreams did I think that there were people who wanted to discriminate against me on the basis of my religion. … [Issues like discrimination] aren’t something we look into very much, but equal protection is a constitutional issue, and as elected officials we’ve sworn to uphold the state and federal constitutions. And since the state has deferred to municipalities [on the subject of protecting gay and transgender people from housing and employment discrimination] we have the opportunity to make our presence known with an ordinance.”

Other topics discussed surrounding the issue of anti-gay discrimination included a question from Councilwoman Carolynn Burt about whether the ordinances would extend health insurance benefits to the same-sex partners of city employees. While Pyle told her that this would not be the case, he added that the city had talked to its insurers and found that doing so “is really not a huge financial cost, and it will be fairly easy to implement from a policy standpoint. So we could do that outside of any ordinance adoption.”

“I’m proud of this council,” Winder said before moving to the next item on the agenda. “Rather than being pushed this way or that, we’ve seen a need and we’re moving forward on this need.”

Asked later how the council would next proceed, Winder said that the city’s staff and attorneys were now working on the ordinances and he expected the council to discuss a draft of them during a study session in April or May.

Ultimately, he said he expected the ordinances to be similar to Salt Lake City’s.

Not as I Do