Thirty-five years ago I went to Brazil, on a lark, to teach English as a second language. I stayed 10 months, before going to France to do my chef apprenticeship. While in Brazil, I found the cuisine to be, well, minimal. There were, however, a few bright spots. In that country, usually on the outskirts of towns, there are restaurants called churrascarias. These places mainly serve the foundation cuisine of Brazil which is rice, black beans, and a sautéed, floury grain called farofa, along with sliced oranges — which are all served under the name feijoada. The dessert was nearly always a very thick South American version of flan. Once in a while, they also served the very unusual “green corn or avocado” ice cream. In a churrascaria or rodizio, these items were accompanied by many kinds of roasted meats served on a sword. Servers would come around and slice off small tastes. I loved it when I went to churrascarias in Brazil, and I felt the same way when I went to the Rodizio Grill in Trolley Square.
The whole trip to the Rodizio was a nostalgic blast because I went with Rhonda Hunt del Beni, a very old friend from BYU days who is now a real-estate magnate in Laguna, Calif. We’ve sort of been in love for years and it was so fun to take her to a churrascaria. The Rodizio is a booming business: The restaurant was packed on the Tuesday night we went and the parking lot was packed, too. We were greeted by the young manager on duty, Takeo, who, like many Brazilians is of Asian descent and spoke remarkable English. Rhonda and I were seated near an upstairs window on the east side of Trolley Square. It was one of those almost-spring afternoons where I forgot how awful Utah can be during the Legislative Session! We were not up to schlepping through the salad bar, so Takeo and his hostess did the schlepping for us. I brought an Argentine Malbec, Decero, which is $20. Although it came highly recommended, we thought it was too tightly wound and lacked a smooth finish. I’ll take a different one next time.

We were served two small appetizers: breaded and fried bananas and Italian polenta cut into little “French fries.” The bananas seemed too sweet for an appetizer, but knowing the South American palate, I was not surprised. Rhonda and I loved the polenta, which was sprinkled with Parmesan cheese, and we asked for more. Takeo chose us different salad plates for both of us, and we were delighted. Rhonda has crisp greens topped with strawberries and coconut in a light and delicious dressing — a salad I have already tried to copy — and I had hearts of palm, marinated mozzarella balls, and a soy and corn salad which was very different and nice. He also brought us a platter with small servings of the traditional feijoada items which were nicely made.

I have to tell you about farofa. It has a past steeped in poverty and comes from a time when the first Portuguese colonists in Brazil didn’t have a lot to eat. Farofa is mainly wheat flour that is fried in a pan until it browns a little. Sometimes there is some butter, onion or garlic involved but, to me, it has always been a little bit like eating sand. I mentioned to Rhonda that the powdery stuff would be like this and Takeo said that would not be the case But when it arrived I asked Rhonda what she thought and she agreed with me: “It tastes like sand!”

At each table there is a small glass indicator that tells the servers you are ready to begin receiving the roasted meats. The indicator is red on one side meaning “stop” and green on the other meaning “go.” We placed the red light in an upward position and the beef came.

We started with top sirloin which was very tasty and BBQ-like — not heavily spiced but nicely seasoned and smoky. We just took small slices of it. Next came ham, which was not juicy like the other meats, and then a nice fish interlude of mahi mahi. Later, we were served Asian chicken, pork tenderloin, which is called lombo de porco and then my favorite, chicken hearts. The servers also frequently brought us roasted pineapple, which I found to be a great palate cleanser and a welcome accompaniment to the roasted meats. All the meats, with the exception of the ham, were juicy and just what you’d want — not overly salted as I find so many franchise-style places are doing nowadays. Although, there was one thing I missed, which I’m sure is unavailable in the U.S.: cupin, the roasted hump of a Brahma bull. It’s sweet, rich, stringy and pork-like, maybe one of the most unusual meats I’ve ever had. I would have been blown away to find that in Salt Lake City, but, alas, you can’t have everything.

All the servers were Brazilian and very charming, handsome, and expertly trained. Rhonda and I were pleased and so excited to enjoy conversation and getting caught up. I will certainly go to Rodizio again. This is a particularly good place to take Utahns who are meat and potato people — the food is different, hearty and delicious. And there is a Brazilian twist that has not sold out its authenticity. I rate the Rodizio Grill 89 points.

The menu is online at rodiziogrill.com and the full Rodizio dinner with all you can eat salad bar and meat choices is $24.99. 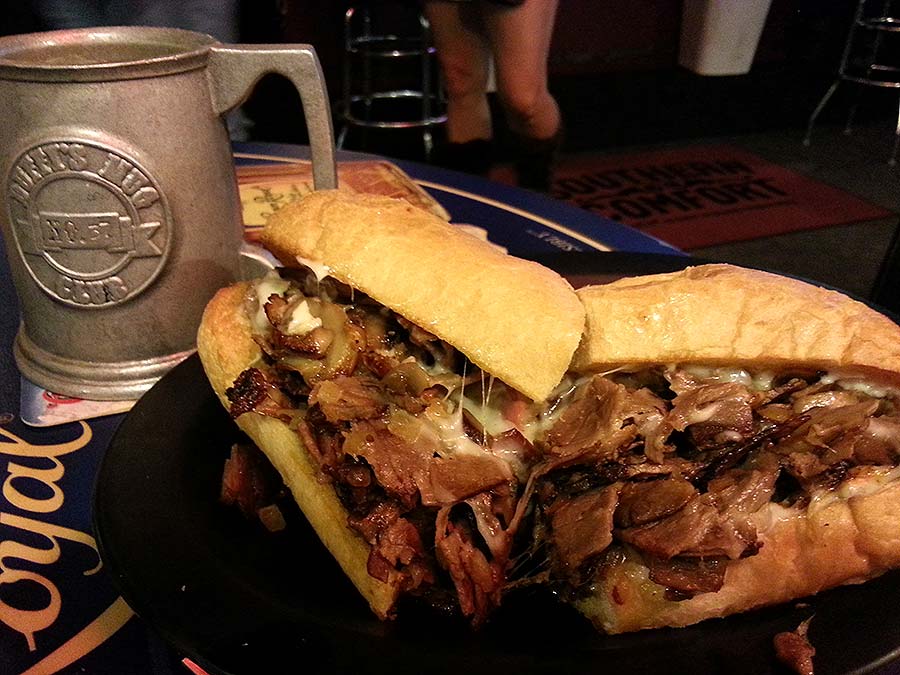