I remember the day we left Utah: Saturday, August 7, 1988. Kelly drove the U-Haul, while I followed in my car. When I saw the sign welcoming me to Nevada, I let out a shout of joy. I had done it! I had gotten out of Utah.

There wasn’t anything I liked about Utah except for my family and friends. I hated the weather. I hated the politics. And I really hated the institutionalized homophobia. So you can imagine that having to admit Salt Lake City was the best place to raise my kids was a pretty bitter pill to swallow. My friend Christina probably summed it up best: “Salt Lake City? Jeez, you must really love your kids.”

I’m not ashamed to tell you that returning felt like failure. We had created a nice life in California. But circumstances beyond my control forced a change in plans, so I swallowed my pride and I returned to the land of my childhood.

But over the past 18 months, I’ve come to realize that it’s not exactly the same place I fled.

Sure, Salt Lake lacks the hustle and bustle of Los Angeles and the sophistication of San Francisco, the last two places we called home. But it definitely grew up in the 20 years we were gone. And that maturity has made it an immeasurably better place to live.

Nevertheless, one of my biggest concerns about moving back was how the boys would be treated. OK, let’s be honest. I worried about how they’d be treated by their LDS neighbors, teachers and classmates. I feared that Gus and Niko would have similar experiences to those I had growing up — only they would face even greater discrimination because they have two dads.

Over and over again I played out the hypothetical scene. Gus would meet a kid in school; they’d become fast friends and he’d invite this new buddy over to our house to play. Everything would be set, but when the door opened, Gus would be standing there alone and dejected. This make-believe kid’s parents would refuse to let their son visit a two-dad house and didn’t want him to be friends with Gus.

My fears seem ridiculous, don’t they? But they were based on what I saw as a child. The parents of kids I counted as friends told their children to dump me because my family wasn’t LDS.

You also have to remember, we arrived back in Utah just prior to the 2008 election. The LDS Church’s very active participation in Prop 8 and the events that followed its passage were helping to fuel my fears. So when Gus became inseparable from a new friend he’d made at school, I started to obsess about a possible play date. The boy’s family is very devoutly LDS. In the group of playground moms with whom I became friends, his mother was the only one I hadn’t specifically told about my sexual orientation. Even as we planned a much-anticipated first play date, I still didn’t tell her. When she came to our place to pick Gus up, I introduced her to Kelly. Her reaction was pretty pedestrian, but I was convinced we’d never see that boy outside of class again.

The very opposite proved to be true. Our boys remained best friends throughout kindergarten and spent a lot of time together at each other’s houses. And even though they go to different schools this year, we still try to get the boys together every now and then.

As a matter of fact, the boy I was convinced I’d never see in my house again was here not too long ago. He and his little brother joined us for dinner and a “boys’ movie night” while their parents got some time alone with their newborn baby.

But for me it got even better. This family, about whom I made such erroneous unfounded judgments, invited our family to the blessing of their new son. Of course we attended. For the first time in my life I sat in an LDS ward house for a service that wasn’t a funeral. And while I admit I was a little uncomfortable, I was also very proud to be there and very proud to be there supporting the family.

As the baby’s father said a prayer over him surrounded by the other men in his family, I sent my own message. “You will grow up in a family that chooses its friends by who they are, not what they are.”

Through two boys’ friendship, fostered by traditional and non-traditional parents, I learned that some fears are best left in the past and that change can be found in the people from whom you least expect it.

It’s good to finally be home. 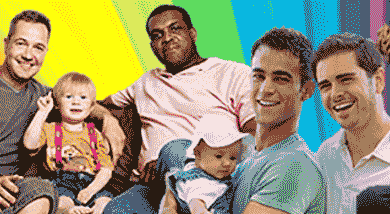 Yours, mine and ours