The staff of statewide gay and transgender rights group Equality Utah met with citizens and elected officials of Taylorsville on March 29 to answer questions about gay and transgender-inclusive housing and employment nondiscrimination ordinances. 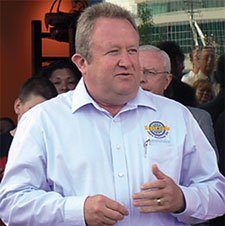 Shortly after Salt Lake City and Salt Lake County passed their landmark ordinances in 2009, Taylorsville Mayor Russ Wall announced that he was interested in learning more about these laws. Wall was present at the meeting along with Taylorsville City Councilmember Jerry W. Rechtenbach, Chief of Police Del Craig and City Administrator John Inch Morgan. They were joined by nearly 20 Taylorsville citizens who also expressed support for such ordinances.

Brandie Balken, Equality Utah’s Executive Director, began the 60 minute meeting by explaining the history of Salt Lake City and County’s ordinances and what protecting gay and transgender people from job and housing discrimination entailed. The ordinances passed by municipalities so far, she said, did not create “special protections” for gay, lesbian, bisexual and transgender people and did not prevent employers and landlords from firing or evicting employees for such things as not doing their jobs or failing to pay rent. Additionally, she stressed that such ordinances would protect all people, not just gay and transgender people.

Balken then discussed the mechanics of each ordinance, including the exceptions each allows for religious organizations, small businesses (of fewer than 15 employees) and landlords with four or fewer units for sale or rent. She noted, however, that each city or county should tailor ordinances to fit their needs. For example, she said that Park City would likely remove the small business exemption because the majority of its businesses have fewer than 15 employees.

“We don’t want to force anything down anyone’s throat, but we want to work with each city to see what would be best for that city,” she said.

Balken, Manager of Field Operations Lauren Littlefield and Manager of Programs and Administration then answered questions posed by city officials and residents. These included what would happen to the ordinances if the federal Employment Nondiscrimination Amendment passed the Senate; whether landlords or employers could be sued for breaking the ordinances; and how many cases of anti-gay and anti-transgender job and housing discrimination the state logged each month.

“It’s actually on par with cases that are based on gender,” said Balken, noting that the number was anywhere from 3–5, according to a study conducted by Equality Utah. “Women are some half of the population and gay and transgender people are maybe seven percent, so it’s occurring in this population and it’s a problem.”

“By passing these kinds of ordinances, what Taylorsville is saying is that we’re a welcoming and diverse community and we value all of our residents, that we want you to come here and work and live and we respect the contributions you make,” she continued.

While Wall expressed some concerns that false claims could be made by employees or tenants “just looking to complain,” he said that he supported the idea of a gay and transgender-inclusive housing and employment ordinance.

“This is not as controversial as I thought it would be,” he told Balken before joking that the city would likely receive more complaints about an ordinance currently under consideration about keeping chickens in residential yards. He noted that proposed employment and housing nondiscrimination ordinances had been brought before the city’s ordinance review committee, a group of citizens who examine and make recommendations on laws proposed by citizens before delivering them to the City Council for discussion in the council’s monthly work meeting. Before the council could vote on the ordinances, however, Wall said that the city attorney would need to check them to make sure they
City government, he continued, asked the review committee to put the ordinances aside at the request of the State Legislature, which intimated that it might pass statewide housing and employment protections inclusive of sexual orientation and gender identity.

Wall said he had not heard anything about the ordinance proposals since that time.

Equality Utah’s staff encouraged all citizens present to urge the City Council to take up the matter again, not only to make Taylorsville a fairer city, but a more prosperous one.

“Businesses like eBay, Wells Fargo and Goldman Sachs have policies that protect people based on sexual orientation and gender identity, and when they want to relocate workforce they look for communities that have the same protections that they have,” said Balken.

One woman in the audience agreed. A Taylorsville resident, she said that the city’s lack of protections for gay and lesbian employees was causing her anxiety during her job search.

“It concerns me that my orientation would affect my status because I want to do well at my job and keep my job,” she said.