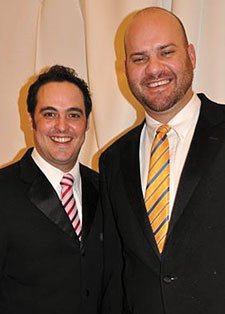 An assault on a gay couple has two victims with black eyes, stitches and potential surgeries, and has a bar owner angry that out-of-town “rednecks” have tarnished his club’s gay-friendly reputation.

On Wednesday, April 7, Ryan Gray and his partner, Kevin Burns, went to Piper Down for karaoke night as they often do on Wednesdays. They were having a good time, Gray said, until a group of men began heckling some friends as they sang a Lady Gaga song.

“They were harassing people in the bar all night,” Gray said. “They were right behind us calling us ‘faggots’ and making fun of our friend. My partner turned around and said, ‘You know, we’re standing right here, we can hear you.’”

Gray said that’s when the men first began to get aggressive with them.

“The redneck gets all huffy and up in his face, and Ryan knocks the guy’s cowboy hat off,” Morris said. “The guy says something and Ryan punched him.”

“He was insulting my partner, and I couldn’t handle it,” Gray said. “I’m a nurse. I’m not usually one to get violent. We were just there to have a good time.”

Morris said that the bar’s security rushed over to the altercation and Gray left of his own accord.
Gray waited by his car for Burns to follow him. As Burns left the bar, however, Gray said the six men in the group followed him out as well. 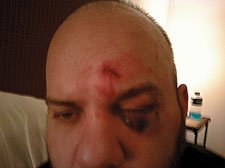 “As [Burns] was walking out, it was like in slow motion,” Gray said. “He was walking out to find me and this guy and all his friends came out with him and they hit my partner from behind, and then in the face and throat.”

“I ran over to protect him, but the guys got us to the ground,” Gray continued. “All we could do at that point was try to shield ourselves.”

“We were all outside dragging rednecks off and getting Ryan and Kevin inside,” Morris said. “The bar just emptied and chaos ensued.”

Bar staff called the police, but the attackers left the scene before they got there.

“This is being handled as a hate crime assault,” Salt Lake City Police Department Sgt. Robin Snyder said. “By the time our officers got there, the bad guys were gone. We have photos of the victims’ injuries, which were pretty substantial.”

The couple ended up with black eyes, several cuts on their faces and heads and bruises on their faces and arms. They transported themselves to the hospital after offering a statement to responding officers. Gray received stitches on the inside of his lip and may possibly require surgery to repair a fractured eye socket.

Morris said that he gave police the names from the credit cards used to buy the group’s drinks.

“They are all refinery workers from Louisiana, Kansas and Oklahoma,” Morris said. “The first [SLCPD] officer there said, ‘I know who you’re talking about. We’ve had problems with them before.’”
Snyder said the police received very good descriptions of the men while interviewing the bar’s staff and patrons and was sure the department would be able to find them soon. Morris also handed the surveillance video over to the police.

“We don’t have problems like this,” Morris said. “I train everyone as much as I can. Part of that is training customers. Don’t put yourself in harm’s way. If there’s bigoted people, I will remove them. That’s why you pay premium prices for beer: extra security, bouncers, and people to pick up after you.”

“The staff and I know they were in the heat of the moment, should have made sure the cowboys stayed inside until they were sure Ryan and Kevin had left,” Morris said. “All we can do is learn from this.”

Morris is very proud of his bar’s mix of patrons.

“We definitely value our gay and lesbian business and protect people as much as we can,” he said. “98 percent of the time it works out. In a mixed club sometimes things like this happens. This is the first case I can remember where it was based on sexual orientation.”

“This all started with someone looking for a fight,” Gray said. “We go there [Piper Down] all the time and have never had a problem. We always feel safe there. I still feel safe.”
At press time, no arrests have been made.

Gray said they are both healing. He has been told his face may be numb for six months to a year because of nerve damage. Doctors are waiting for swelling to go down around his eye to determine if he’ll need surgery to repair the eye socket. Burns, an actor and singer, is waiting to get into a specialist to determine the damage to his throat.