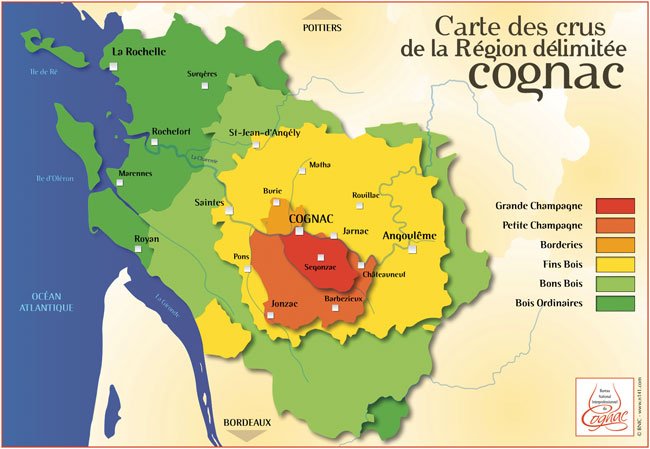 Yes, indeed, there are two places in France called Champagne. The largest and most prominent is the ancient province of Champagne in the north of the country. This is the one that’s famous for the elegant and pricy sparkling wine of the same name. The lesser is two small grape-growing areas in the South of France, just above Bordeaux, which are a part of the Cognac. These areas are called Grande Champagne and Petite Champagne — who knew? Cognac, by the way, is what is thought to be the finest brandy in the world — a spirit distilled from a particular wine using a time-honored process.

Anyway, I was recently in Washington, DC at the French Wine Society where I tasted over 100 wines from all of France, plus six excellent Cognacs. Let me tell you about them.

First of all, I’m hoping my editor will print a small map I was given that shows the Cognac region. Even though I’ve lived and traveled all over France, this was an area I knew nothing about. There is, actually, a town called Cognac right in the center of the area. It is on the north end of the district known as Grande Champagne along with another town called Ségonzac. (The suffix “-ac” in this part of France, means “of” or “coming from,” so many town names end in “-ac.”) The eastern edge of the Cognac is flanked by the city of Angoulȇme, and on the west by the cities of La Rochelle and Rochefort, which are situated on the Atlantic coast. Coastal breezes, salt air and proximity to the Gironde River out of Bordeaux, all influence the grapes. Cognacs are made, most importantly, from grapes called Ugni Blanc — pronounced “oon-yee.”

Hopefully, you can see from the map that the area growing grapes for Cognac is huge. Each area makes its own types of Cognac which are bought and sold by many makers. There are more than a few “houses” that produce old, traditional name-brands of this spirit. With only a few exceptions, the finest products come from the “Grande” or the “Petite” Champagne.

On the map you can see that there are six names or Appelations of the growing areas in the Cognac. They are:  Grande Champagne,  Petite Champagne,  Borderies,  Fins Bois,  Bons Bois and Bois Ordinaires. Many of these lesser Appelations are made into regionally accessible spirits and are usually not exported; however, the finest of the lessers may be sold to the big houses for blending. (Courvoisier — which is the least expensive and commonly sold in the United States, is a carefully formed blend of Cognac made, mainly, from the outlying areas.)

The aging process, also, as with all brandies, is marked by three aging periods and corresponding names: 1) VS or Very Special, 2) VSOP or Very Special Old Pale and 3) XO or Extra Old. The French have recently changed the criteria for XO, now insisting that Extra Old must stay in the barrel for 12 years. The other ages are two to four years and six to eight, respectively.

The Cognac shown in the glasses below are: 1) Remy Martin VS, which is aged in Limousin oak and distilled on “the lies” (e-mail me if you want to know what that means.) Remy Martin is situated in the Petite Champagne and it sells for around $32. As the price indicates,  it’s not the best one, but when you’re not comparing it’s fine. All Cognac is full of perfume and many layers of flavor like a fine scotch or bourbon. The fragrant esters in Cognac are so strong, for example, that when we entered the room for our seminar the air smelled like honey, toasted vanilla and burning sandlewood candles! 2) Martell VSOP is aged in toasted French oak and is older than the Remy and quite a bit darker. It follows a different distilling process than the Remy and is from the Borderies Region — not one of the Champagnes. It was smooth and rich and I loved it! It costs $42. 3) Painturaud VSOP is from the Grand Champagne and was beautiful and elegant but lacked the structure of the Martell. 4) Paul Beau, which I have not seen in the United States came from a “higher cut” in the barrell and had a spectacular honey and butterscotch quality. It comes from Grande Champagne and is $58. 5) Jean Doussoux XO, at $83, was my favorite. Neither from Grande nor Petite Champagne it is made in the Fins Bois. It was the most fragrant, the broadest on the mid-palate, and had the smoothest and longest finish of butterscotch and buttered popcorn. 6) The last one of Delamain Pale and Dry XO,  which had been aged 10 years. Delamain uses old, French barrells which enhances the aged flavors. It comes from Grande Champagne and truly was pale and dry but extremely elegant. It costs $91. Many conference-goers preferred the Delamain, but I was smitten by the Doussoux and the Paul Beau.

Normally, spirits are not my thing, and wine, for me, is “safer.” But I loved tasting and learning about Cognac and its deep tradition and influence on the culture of France—especially if you’re into spirits. Next time, skip the scotch and go for a good Cognac.

One other thing: The new Wine Store on 300 West carries a special order Courvoisier called “Exclusive” which is a carefully made blend of distillations from throughout Cognac. It’s around $50 and I highly recommend it.