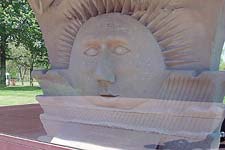 Once again, several papers, panels and presentations about gay and lesbian Mormons will be part of the Sunstone Symposium, an annual event that explores the complexities of LDS history, religion, culture, art and politics on what its parent organization calls “free and frank” terms.

Themed “Reflecting on a Mature Faith,” this year’s symposium will be held, as in years past, at the Sheraton Salt Lake City Hotel, 150 W. 500 South, Aug. 4–7. The first gay-themed panel will be held Aug. 6, 10–11 a.m. Rev. Dr. C. Welton Gaddy of Monroe, Louisiana’s Northminster Church will present the paper “Same-Gender Marriage & Religious Freedom: A Call to Quiet Conversations and Public Debates” about the ways in which society can shift the debate over gay marriage from “a scriptural argument to a religious liberty agreement,” which includes the promise of equal rights under the U.S. Constitution.

Later, from  2:15–3:15 p.m. Sunstone Magazine news editor Hugo Olaiz will moderate a panel on responses to 8: The Mormon Proposition, Reed Cowan’s controversial documentary about the LDS Church’s role in passing California’s Proposition 8, which re-banned same-sex marriage in the state. Here, panelists Laura Crompton of MormonsForMarriage.org and author Robert E. Rees (No More Strangers and Foreigners: A Christian Mormon Response to Homosexuality) will discuss the film’s strengths and weaknesses, and its influence on same-sex marriage debates as well as the church’s behavior towards gay and lesbian members.

On Aug. 7, John D. Gustav-Wrathall, a University of Minnesota history professor, will present a paper titled “Church, Priesthood, and the Gay/Lesbian Journey Toward Spiritual Maturity” as one of three papers presented between 8:45 and 9:45 a.m. This paper will examine the division between gay and lesbian Mormons who have left the church “via inactivity, excommunication, or suicide” and the “minority” who have remained and “subordinated their need for satisfying relational intimacy to Church law” which prohibits gay sex. Gustav-Wrathall will argue that the path to spiritual growth for gay and lesbian Mormons lies in engaging with tensions such as these.

The short film Two Loves: Documenting Gay Mormons’ Stories will be screened from 3:30–4:30 p.m. This is a 25-minute documentary featuring interviews with gay Mormons who have left the church, remained in the church, and with author Carol Lynn Pearson, the ex-wife of a gay Mormon man who has written several books about the church’s treatment of gays and lesbians. English literature and film student Michelle Ripplinger will present.

Following directly at 4:45 will be the panel “Gay and Mormon on the Stage and Screen.” This will include the talk “Mormon Mothers as Devices (Key Change-Agents) Used to Reduce the Toxicity of LDS LGBT Inertia.” Here, actor Charles Lynn Frost will discuss the insights he has gained into LDS families with gay children in the years he has performed as Sister Dottie S. Dixon, a character who is a Mormon mother with a gay son. In the second presentation, “Coming Out Mormon Style: Three Recent Plays, One by Me,” playwright Eric Samuelsen will discuss recent “coming out plays” with LDS themes.

Sister Dottie will also appear in a special one-night performance Aug. 5 with Mr. Deity, the star of a humorous webcast about the life of the ruler of the universe and the troubles of running the cosmos. Mr. Deity is played by Brian Keith Dalton.