Over half of Team Utah athletes attending Gay Games VIII this summer brought home medals, with Utah’s top woman cyclist winning three gold medals, and the state’s water polo team beating the international favorite in the finals for the gold.

Margaret Douglass, the Utah athlete with the most medals from previous Gay Games, added three more golds to her collection of five gold and two silver medals in cycling. She was only supposed to compete in two events at this year’s games in Cologne, Germany, but when the German women’s team saw her perform in the criterium and road race, they asked her to join them for their team trial race.

“I felt very honored and told them yes [and] we won the gold. They were really strong [and] one of them had out-sprinted me in the two previous races,” said Douglass.

At the time, Douglass was not feeling her best and was not using her own bike. She rented a bike at a local bike shop instead of shipping her bike via plane, which was cost prohibitive.

“My sprinting wasn’t what I can usually perform because of jet lag, not [using] my own bike, and the bike wasn’t a top of the line bike, meaning it didn’t respond when I sprinted like mine does,” she said. “So I felt very good about my performance overall.”

“We had a two-time silver Olympic medalist racing amongst us, Michelle Ferris [from Australia]. I was determined to out sprint her but she got by me before the [finish] line,”said Douglass. “It was fun racing with a former Olympian, and when I won my medals in Sydney she was the one who presented our medals to us.”

When not competing, Douglass also cycled Germany’s beautiful countryside. “One of the highlights of my trip other than the races was riding to Bonn from Cologne,” said Douglass. “I got to feed some sheep, and the older sheep just loved my massages.”

The Queer Utah Aquatic Club’s water polo team made up of 14 gay, lesbian and straight players, was placed in the tougher of the sport’s two brackets. This meant they played two games the first day of the seeding process, one of which was against defending champions, West Hollywood.

“The QUAC water polo team played very well throughout the tournament and showed a lot of character in winning the gold,” said Pat Hayes, QUAC water polo coach and player. “But the kids hung to together and seemed to play better and gain in confidence with each game.”

After the water polo team lost to Melbourne, Australia in the seeding games of the tournament, they realized that this was the team to beat. QUAC was placed second in their bracket and so had to battle throughout the brackets to make it to the championship game.

“Everyone played very well and kept the intensity level up for the entire game. QUAC ended up winning 11-5,” said Hayes. “[I’m] so very proud of the team for sticking to the game plan and helping and supporting each other throughout.”

The QUAC water polo team was a diverse group, including three women players, team members who had never competed at a Gay Games, and players ranging from college age to middle-age water polo veterans.

“From the opening to closing ceremony everyone seemed to have a great time competing, hooking up with old friends, making new ones and exploring a different culture,” said Hayes. “Everyone seemed so happy just to be there that it was [as] if the competition aspect was almost secondary. Each night there were numerous parties and activities that no one was wanting for something fun to do.”

QUAC’s lone swimming entrant at the Gay Games, Val Mansfield, competed in four races. Although he didn’t place in his age category, the experience of competing against an international field of backstroke and crawl enthusiasts added to his stamina in a swim tournament arena. He is expecting to continue to compete in upcoming IGLA and national swim tournaments.

“John Bennett and I had signed up for the singles and doubles events. We did not sign up for teams [four people] as we were the only bowlers from Utah,” said Lee. “When we got to Cologne we asked if there were any openings on teams. The day of the team event we arrived at the bowling center and discovered that we had been placed on different teams. I was with three Germans.”

Lee made it to the finals in all his events, which were singles, doubles and the team event. His team placed second in their division. He and the team won the silver medal the day before his birthday, Aug. 6.

“In six days, I bowled 21 games and threw my ball more than 500 times. My left thigh is still tight and sore,” said Lee. “The bowling took six days and unfortunately, the only other event I got to see was our Utah Water Polo Team beating a California team.”

Also unfortunately, Bennett, the member of Team Utah who has attended the most Gay Games representing the state and who bowled alongside Lee, did not medal.

“Our team, BK Paris International, won bronze in the fast-pitch tournament and then gold in the slow-pitch tournament,” said Nancy Joyce, who joined the Paris team with her partner. “All in all, we played 16 games in six days. There were 12 women on our team: three from Paris, three from Berlin, two from Salt Lake City, one from the Netherlands, one from Canada, one from England, one from Australia, for a total of four languages.”

Joyce and her partner traveled to Cologne a week before the games to practice with the team. “Eight of us lived together in an apartment, which I believe contributed to the great camaraderie that our team developed,” said Joyce. She added that the coach spoke English with the team, which in turn encouraged the team to communicate in English, with a bit of German on the side. But they all learned different cheers in all four languages.

“We were the only international softball team and it was incredible to see how we rallied in the end to win the gold medal in the slow-pitch tournament, playing like a team that had played together for years,” said Joyce. “Playing on an international team is a great way to meet new friends. Once a small group of French women smiled at us and started speaking French to us. We had to apologize and tell them that we didn’t speak French even though we had BK Paris T-shirts on. They laughed.”

Team Hardwood, Utah’s men basketball team, did not fare well at Gay Games VIII. After winning silver at the Chicago Gay Games four years ago, the team moved up to the 35+ category, expecting that their experience would dominate in the age category. According to Ralph Ingersoll, most of the teams in their division had players that were 6 feet 8 inches or taller, which made defending against the other teams particularly difficult. Coach Stewart Ralphs is Team Hardwood’s tallest player at 6 fee 7 inches tall.
“We got second in every game we played,” said Ingersoll, meaning that the team didn’t win a game. But the team had a great time and experienced Cologne and the Gay Games as any 35-year-old or older male could.

As predicted, more Europeans attended the Gay Games VIII than originally registered to participate. Final numbers estimated 9,500 registrants in the sporting and cultural events, with another 800 or more attending at the opening ceremonies. Gay Games organizers had estimated 8,000 registrants, so they beat their predictions. The numbers may mean that they have made money for the international non-profit, gay and lesbian sporting organization.

“The opening ceremonies were amazing.  Before the ceremonies all of the athletes met outside the stadium and got organized by team,” said Lee. “This was the first time we got to see everyone together and it was amazing to see the teams from so many countries. We traded our [Team] Utah pins for other team pins and had a little time to meet people from other teams. I don’t know how it happened but I got to help carry the Team Utah banner into the stadium.”

Though it did not boast the largest attendance at a Gay Games, this year’s event assembled over 10,000 visitors in Cologne during a world-wide recession for an international gay event, making it a huge success. A few surprises accompanied Gay Games VIII, including Ford Motor Company, an official sponsor, handing over the six vehicles that were used as official travel vehicles for Gay Games German staff preparing for the games, the City of Cologne extending the drinking curfew from 10 p.m. to midnight after the games began, and a police escort of team trial cyclists after their finals to the city centre of Cologne in honor all Gay Games participants.

“I had the time of my life,” added Lee. “I will remember and cherish this week in Cologne forever.” 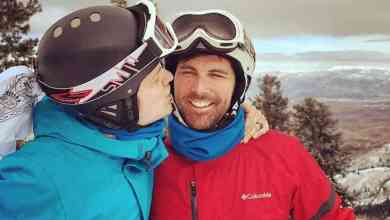