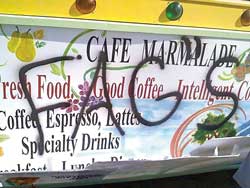 On Aug. 20 the Café Marmalade sign at the Utah Pride Center was tagged with the anti-gay slur “Fag”s,” leaving many members of the gay, lesbian, bisexual and transgender community to wonder if the misspelled word was a prank by local youth or something more sinister.

Li Nolan, an employee of the Center’s in-house bistro, discovered the vandalism at 5:30 a.m. when she arrived to open the restaurant for business.

“She was pretty terrified, not knowing if the individual or individuals [responsible for the vandalism] were present, or if she was going to find more damage inside or around the building,” said Marina Gomberg, the Center’s director of development and marketing.

Gomberg said that Nolan then called the café’s owner. By the time she arrived, so had reporters from several TV stations and newspapers, who had likely heard about the event over police radio frequencies. Gomberg herself arrived  at 9 a.m. and promptly called Executive Director Valerie Larabee. By that time, she said that Marmalade employees had covered the sign with boards.

Currently, added Gomberg, the café is deciding whether they will purchase a new sign or allow the Salt Lake City Police Department’s graffiti removal team to try and clean the old one.

Just hours after the vandalism, the Utah Pride Center published a statement on its website and Facebook page saying that the graffiti would not intimidate the Center to remain silent on gay and transgender rights issues, of which it is a strong proponent.

“We realize that often times the purpose of these actions are to cause widespread fear among the members of our community,” wrote Larabee. “That is why today we are speaking out.  This will not be swept under the rug.  We will not be scared into silence by acts of intolerance.”

Larabee and Gomberg also said that the tagging could have been a response to political progress that gay, lesbian, bisexual and transgender people have made in recent months.

“We welcome civil, respectful dialogues with those who disagree with our mission, but this kind of hate language and vandalism will not be tolerated,” said Larabee.

The Salt Lake City Police Department is currently investigating the case, but has yet to identify any suspects, said Sgt. Robin Snyder, public information officer for the department. She added that patrols in the area are paying close attention to the Center and the area around it and making frequent reports. The case is being treated as a hate crime, she said.

Snyder added that this was the first incident of vandalism at the Center that she could recall.

Gomberg said that the Center appreciated the department’s work and that of the LGBT Public Safety Committee, an organization of law enforcement offiicers and gay, lesbian, bisexual and transgender community members who work together to improve dialogue and relations between the two groups. The committee, she said, is aware of the situation and “is in touch should anything else happen.”

Reactions to the Center’s Facebook post about the incident were varied. While some members of the community expressed anger and sadness, others mocked the taggers’ spelling and said that they were more determined than ever to fight for gay and transgender rights.

“I won’t be intimidated. I am gay, proud and always will be,” wrote Justan Alma Peterson.

“Just remember guys, with every opposition that comes our way, we have the opportunity to grow from it!” added Heidi van Oostendorp.

Readers with any information about the vandalism at the Center are asked to call 801-799-3000.