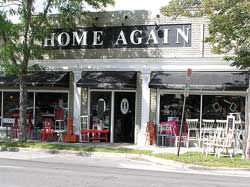 Making a home’s interior truly unique and beautiful is often a challenge in this contemporary world of cheap, mass-produced furniture. Thankfully, consignment shops like Home Again are there to help add a touch of class and beauty to any home with unique furniture in a variety of styles — including some items that most people wouldn’t think of as decorative.

“We’ve even had a reclining wheelchair made out of wood,” said Kathryn Blomquist, manager of the Sugar House store. “That was kind of interesting. And right now I have a tortoise shell with a net on it to hang on a wall.” A canoe, she added, has also found its way into the store to be snapped up, as have antique watering buckets and horse troughs.

Typically, however, both Home Again locations specialize in what Blomquist calls “eclectic and fun” furnishings in styles ranging “from Asian to French and Italian to German,” and which include everything from armoires and kitchen hutches to headboards and benches crafted by local artisans.

“They’re all very unique in their own way,” she said.

The Sugar House store was opened in 2002 by Lisa Herbold, the owner of a consignment clothing store near the University of Utah’s lower campus. Herbold moved to Jackson Hole several years ago, and the store is now owned by Emily Larsen, as is the Midvale location, which opened in 2007.

While many furniture consignment stores (such as Now & Again, which is also featured in this issue) specialize in small items that fit well in downtown apartments, Home Again carries larger items like book cases, dressers and coffee tables. Most of these items, said Blomquist, are imported by consignors, but both shops also accept consignment items from locals.

“We have to see pictures of large items before they’re brought in,” said Blomquist, noting that both locations are highly selective about what they take. Small items, on the other hand, can be brought in any time.

“We get really great dishware, china, all different kinds of stemware,” said Blomquist.

If the item does not sell in 90 days, consignors must pick it up.

Although Home Again has some pricier pieces — the most expensive in the Sugar House store, said Blomquist, is valued at $10,000 — both locations have a wide selection for shoppers, decorators and bargain-hunters of all budgets. Some classy end tables, for example, start at just $30.

“It all depends on the piece,” said Blomquist.

And while some pieces are vintage, several are brand new, a fact which only adds to the eclectic charm of both stores, which Blomquist described as “very different” from each other.

“We don’t just specialize in old furniture. It’s a mix of new and old,” she said.