And as of this month, Nimer is now a candidate for political office. When Nancy Davis, the Republican challenger to Sen. Ben McAdams’ District 2 Senate seat failed to file all her paperwork by the registration deadline, the Utah Elections Office disqualified her, leaving the party just one day to find a replacement.

“The county [party] called and asked me to fill in the spot that got vacated,” said Nimer. “They said, ‘We can’t think of anybody better than you to fill in that spot. Will you run?’”

Nimer’s response catapulted him fairly late into the race in this heavily Democratic district. Nonetheless, he said that he and his campaign volunteers are working quickly to put up a website, print fliers and hit the streets for canvassing. Although the election is still in its early stages, one thing at this point is certain: gay and transgender rights will not be a wedge issue. Perhaps for the first time in Utah political history, both the Republican and Democratic candidate agree on practically everything from the importance of job and employment protections to the need for same-sex partners to be able to sue in cases of wrongful death.

“Senator McAdams has done a great job representing our community and filling Sen. Scott McCoy’s shoes,” said Nimer, who like the senator that McAdams replaced is also openly gay. The real contention in the election, he said, will thus be about both candidates’ different approaches to several issues affecting not only their district, but the state at large.

Some of the main issues that Nimer and McAdams consider to be highly important are state budget cuts, education and immigration. Like many people from all party affiliations, Nimer said that the state’s budget has been on his mind a lot lately.

While Nimer said that programs such as the state’s AIDS Drug Assistance Program “need to be funded, totally,” he said that his main concern about the state’s economy is the complex interplay between job creation and a strong education system.

“They’re not separate topics,” he said. “They’re all combined and interlinked and there is no one answer for each problem. We have to look at the much bigger picture in order to solve all these little problems.”

To solve the state’s budget crisis, Nimer said that Utah must support small businesses, which are the state’s economic backbone. To this effect, he said that the state should lessen government controls on business creation. As an example, he cited Utah’s heavy regulation of liquor licenses, which he said prevent many would-be restaurateurs from going into business and therefore costs the state jobs and revenue.

“We don’t need a whole bunch of rules and micromanaging what everyone does with all their time in building businesses,” he said.

While both candidates agree that the state is not adequately serving its pupils, their ideas for improving the system — and especially getting it more money — differ considerably.

In order to better fund the system, Nimer said he would support changing how the state handles taxation. Currently, he said, 70 percent of Utah is owned by the federal government, meaning that the state government has only 30 percent of the state to draw upon when crafting its budget.

“One way to finance education is through property taxes,” he said. “In New Jersey, where only 7 percent of the land is federally controlled, they fund their education system the same way we do. And where we spend just $5,000 per student they can spend $13,000 per student because they have control of the land and we don’t. We need to change that and work things out with the federal government  where we can use [this land].”

In order for Utah to get the most out of its acreage, Nimer proposed coming to terms with the federal government on issues such as mining in federal monuments like the controversial Grand Staircase-Escalante National Monument, which sits atop a vast coal reserve. He said that the monument could be treated much the same way as are ski resorts in Utah’s national forests, which he calls “a good use of federally-owned land that the state gets money from.”

“Mining that could easily be done [at Grand Staircase] without any harm to the environment or to the monument,” he said. “It won’t affect anything anyone’s going to enjoy and we’d be able to get thousands of tons of some of the cleanest burning coal available.” A plan such as this, he said, would also boost the state’s sluggish economy, creating jobs and putting more money in the hands of citizens.

But one thing Nimer said should not be in the hands of Utah residents is immigration, which he called the purview of the federal government. To that effect, he said he opposed a bill by Rep. Stephen Sandstrom, R-Orem, that mirrors a controversial Arizona law.

“[Bills like Sandstrom’s are] a simplistic answer to a really complex problem. It’s trying to take on a federal issue at a state level and that’s not appropriate,” he said.

However, Nimer said that Utah could set up a system to help employers understand how to verify the resident status of their employees and to get illegal immigrants “help to become legal rather than deporting them.” The United States, he said, has historically depended upon a migrant workforce of foreigners from a number of nations, so taking a hard-line stance against illegal immigrants would be counterproductive.

“We have to respect the fact that those people are human beings and we need to develop a system [that treats them with dignity], he said.

Another person that Nimer said he will be treating with dignity is his opponent, who he has met and who has also promised to stick strictly to the issues facing the district and the state. And while he acknowledges that a Republican win in a heavily blue district will be “an uphill battle,” he said that it’s one in which he will engage wholeheartedly.

“This is not a game,” he said. “We are in this as a serious campaign.” 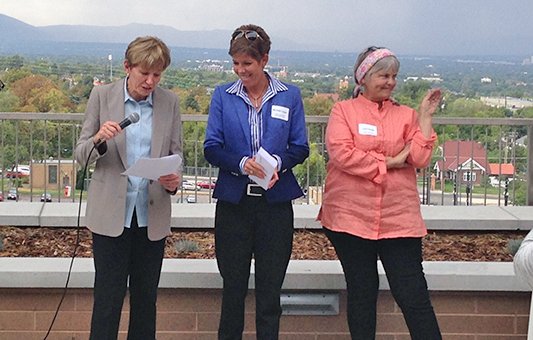