Charles J. Cooper’s argument for upholding Prop 8 was that marriage is, by definition, a union between a man and a woman. 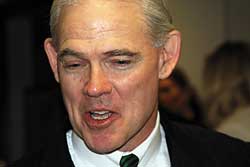 Cooper’s testimony before U.S. Judge Vaughn Walker mirrored his talk at BYU. Walker decided against Prop 8 proponents, saying that it infringes on gay and lesbian couples’ 14th amendment rights under the U.S. Constitution.

“Child-rearing and procreation is important in matrimony,” Cooper said. “but also to nature and society.”

“The question is not can a same-sex couple raise a child as well as a heterosexual couple,” Cooper said. “It is about the long-term effects, including contributions to society.”

He also argued in the memorandum that same-sex marriage de-institutionalizes marriage. Allowing same-sex marriage weakens the social norms with respect to marriage, and shifts the focus from fulfilling socially valuable roles such as parent and spouse to “personal choice and self-development,” his legal team wrote.