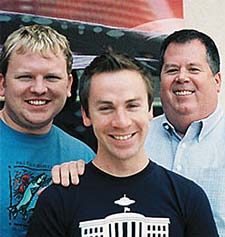 A support group for gay, lesbian, bisexual and transgender current and former Mormons plans to raise awareness of homeless youth by giving themselves a taste of what these youth go through on the streets.

On Oct. 6, Affirmation’s top three leaders: Executive Director Dave Melson, Senior Assistant Director George Cole, and Assistant Director Micha Bisson, will travel to San Francisco, check into a nice hotel and, four hours later, head to the streets with nothing but their clothes, a cheap watch and be ‘de-glamored’ from their usual appearance. For 24 hours, said Melson, they will survive on the streets by panhandling, dumpster diving, and searching for safe places to sleep. Local journalists and TV stations have been invited to cover the story, though at press time, Melson said that none had confirmed their participation.

“Homelessness and suicide are two of the problems we decided to take on this year,” said Melson, explaining why he and Director of Outreach and Advocacy Robert Moore had chosen such an event. “We felt if we’re going to put a dent in this [youth homelessness], we should know as much as we can about what these kids go through.”

“Granted,” he added, “we are only doing it for 24 hours, and we get to go back to clean beds and hot showers. These kids don’t know where their next meal is coming from or what tomorrow’s going to be like.”

Melson stressed that he, Cole and Bisson would not be using any resources designated for homeless people, including shelter space or food.

“When Robert was making up plans for this, I know he talked to a lot of homeless people, and we went out of our way to make sure we weren’t patronizing anyone,” he said. “The rules are you must panhandle for at least one hour, you’ve got to find food from a public source, like dumpster diving or getting someone to buy you food. You must find a place to use as a restroom, you must stay within certain boundaries on the map, and you can’t take resources.”

“Also,” he added, “you can’t tell anyone what your doing to get help in any way.” Although a security person will be on-hand a few blocks away in case of an emergency, Melson added that the guard would not be within sight.

Following the event, Affirmation will hold a rally on Oct. 8 outside of San Francisco’s City Hall. There, homeless youth, and representatives from the Human Rights Campaign, social justice group Soul Force and the Trevor Project, an organization that seeks to prevent gay suicides, will speak about youth homelessness and the impact on gay, lesbian, bisexual, transgender and queer youth—who make up nearly 40 percent of the homeless youth population in the United States.

Following the rally, attendees will go on a candlelight march from city hall to Harvey Milk Plaza. The Affirmation leaders will also be on hand to talk about their experiences on the streets. Moore, Melson added, will also talk about being kicked out of his home as a teenager when his LDS family discovered that he was gay.

Castillo earns over 48,000 votes so far in congressional race