Organizer Eric Ethington addressed the crowd before the crowd walked to the protest area.

“We are every color of the rainbow,” Ethington said to the crowd. “And we are tired of watching our children die.”

Ethington, founder of PRIDE in Our Community, called the rally after Packer, president of the Quorum of Twelve Apostles, made the remarks during a sermon against same-sex marriage and pornography. Packer stated that the LDS Church would always oppose same-sex marriage, said that gays and lesbians could change their sexual orientation to straight, and compared homosexuality to “a habit or addiction that is unworthy.”

“There are those today who not only tolerate but advocate voting to change laws that would legalize immorality, as if a vote would somehow alter the designs of God’s laws and nature,” he said. “A law against nature would be impossible to enforce. Do you think a vote to repeal the law of gravity would do any good?”

Local and national community leaders decried Packer’s speech as anti-gay, misinformed and irresponsible out of concern that those struggling with accepting their sexual orientation may choose suicide as the second-highest leader in their church declares them “immoral.”

“We are who we are,” Ethington said. “We cannot change, and you cannot change us. The more you say this, the more dead bodies you leave behind.”

Ethington acknowledged that Packer and the Mormon Church has a right to express their views.

“But there are consequences for your words, he said. “These are our lives and we will protect them at any cost.”

“To the youth of the church who watched,” Ethington said, “We love you. You are beautiful and perfect just the way you are. Do not listen to others who do not love you for who you are.”

After those brief remarks, Salt Lake City police closed State Street and the crowd walked across en masse. People were instructed to lie on the side walk, head-to-toe and encircle the two square blocks. There were so many protesters that in parts, people were lying four-deep. Many simply walked around the blocks and took in the sight.

QSaltLake counted over 1,100 people lying down and walking along West Temple, one of the six blocks lined with protesters.

Many people held signs in support of gays and lesbians. Some held photos of gay and lesbian people who have committed suicide. 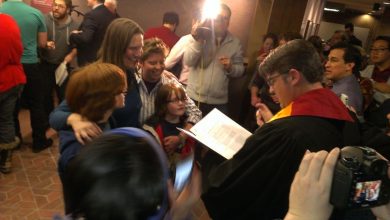 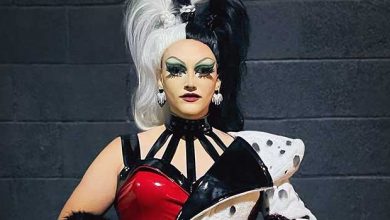